Since Mind and Bam back in town, we went to visit them at home. Their house wasn’t far from our apartment.
We’re going to stop by at Piggy Wigly before their house because we still had time but on the way, we’re talking about casino (last year) and I realized I didn’t bring my passport. We had to go back and get it so no Piggy Wiggly moment.

We got the their house at 11 am. We saw their host dad walking around, doing thing around the house.
They have a big piece of land in the back of their house that they grow fruits and vegetable (not right now because it’s too cold) 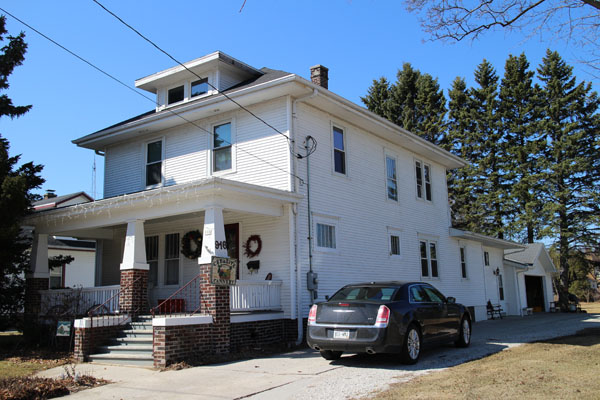 We went inside the house and found Bam and Mind were watching TV downstairs.
The host dad showed us the picture they took with Bam and Mind in Minnesota. They like to make funny face. The girls took me up stair to show their bedroom.
They actually have a sepperate bedroom. But Mind said if the cat sleep in her room, she will sleep with Bam. Hahaha
There’re 2 cats in this house but the black one likes to sleep in everybody spot.
I told them they can close the bedroom door if they don’t want the cat to come in but they don’t mind. 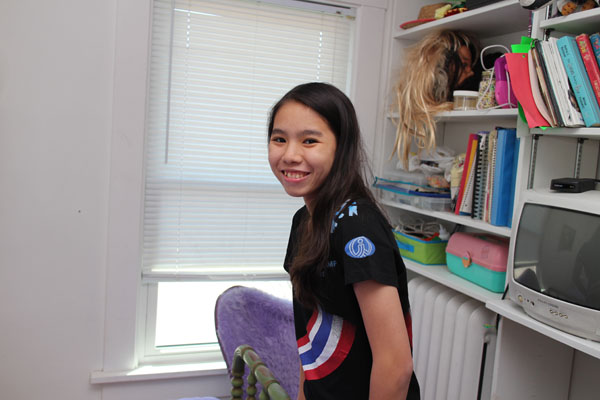 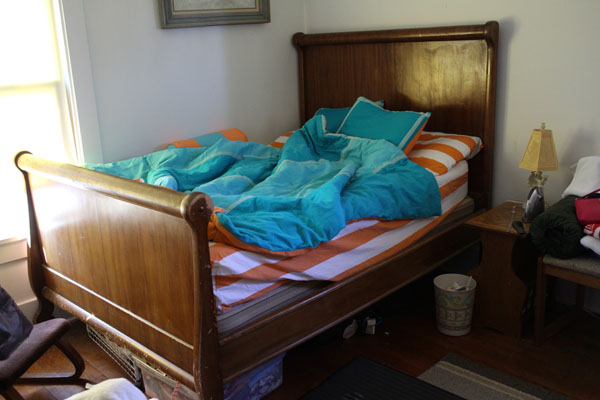 (This is Bam’s bedroom)

I talked to them for a while and taking some pictures before come dowstair and went outside to their backyard.
I walked pass their Jam making room. Their host mom makes jam for sale also. She took the fruits from her backyard to jam.
Bam said her jam and her bakery are yummy. Their host mom gave me 2 bottle of grape jam ie ie. 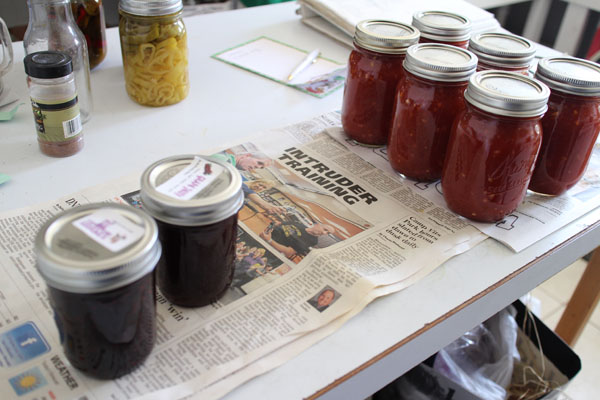 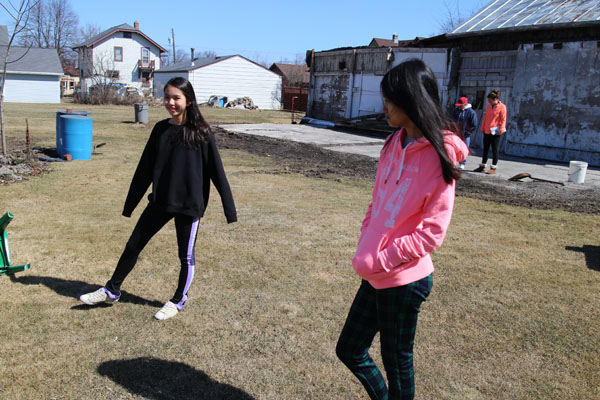 We went out to their backyard. It’s kind of a small farm in town.
Right now they didn’t have anything growing but soon it will be.
They have an old barn and a lot of wood for winter. 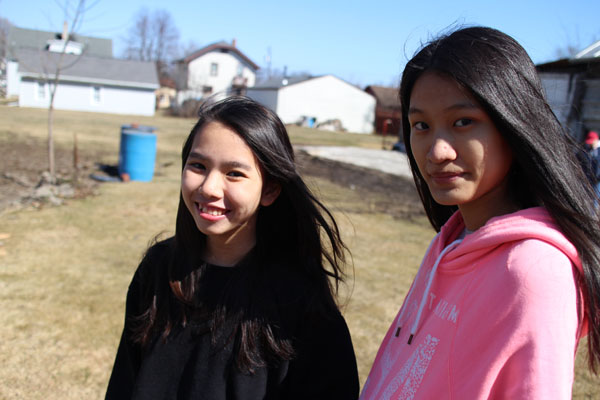 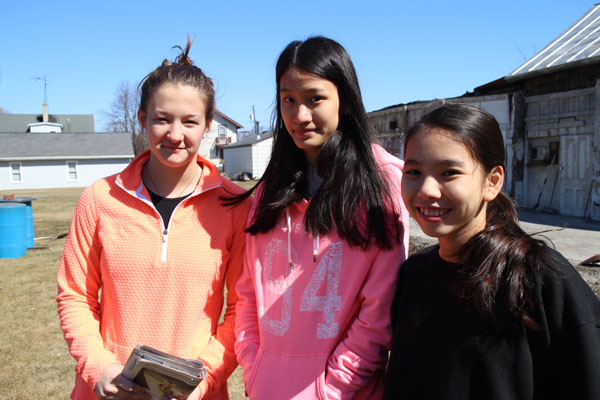 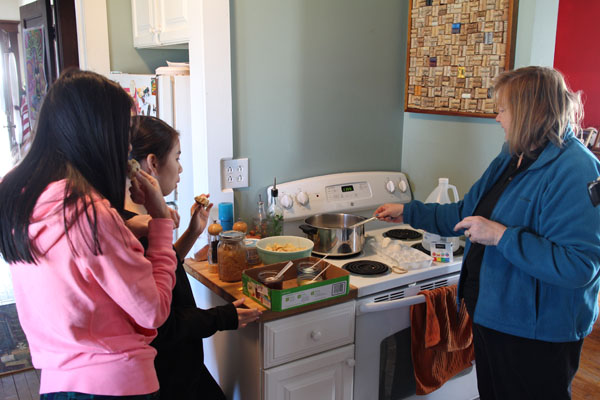 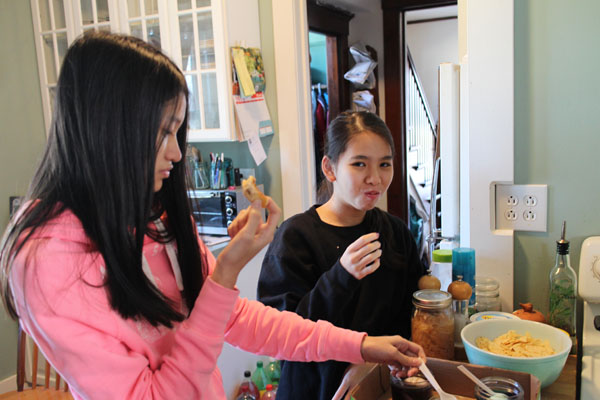 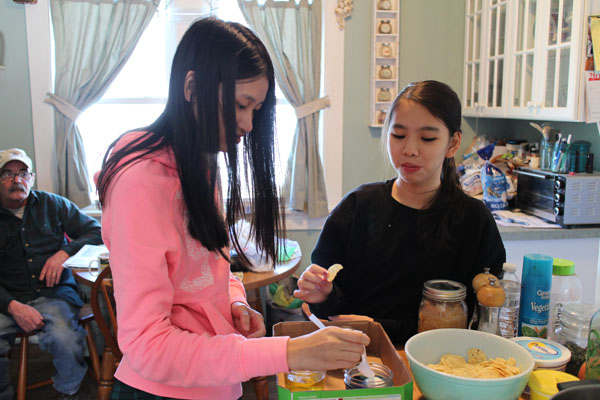 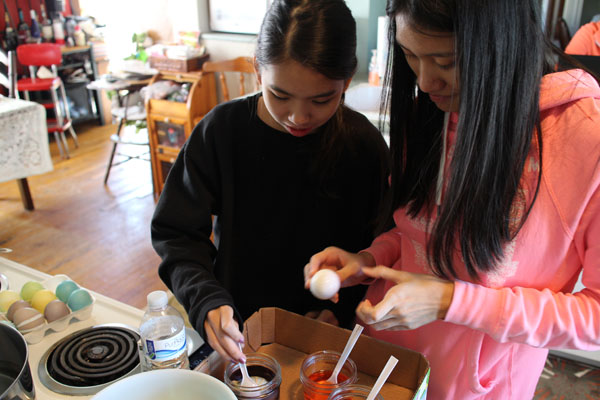 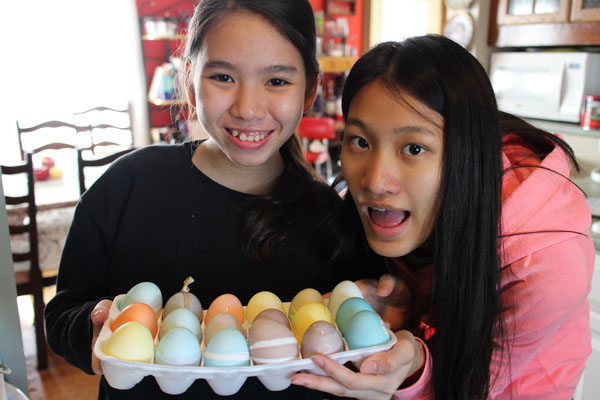 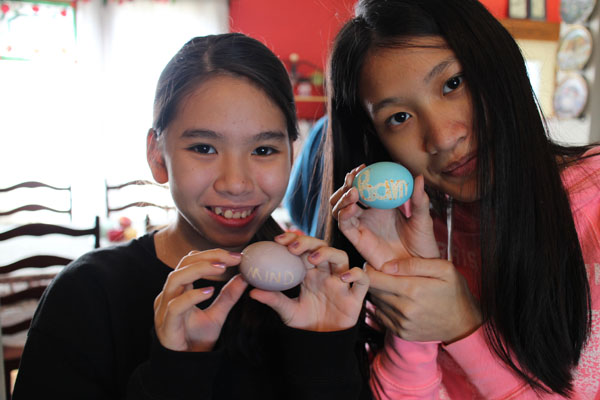 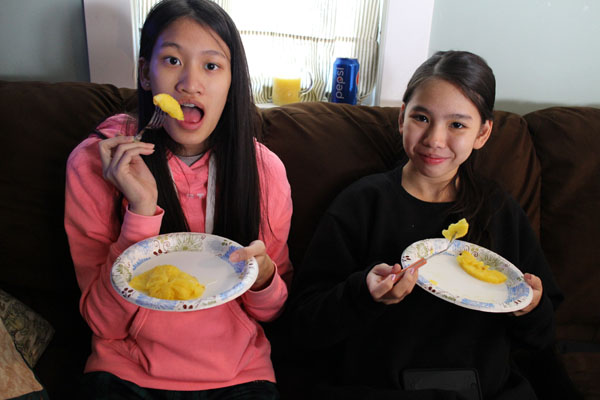 It took them an hour I guess to paint all eggs. It’s their first time. The last 2-3 eggs were quite fancy.
We left after they’re finished. We’re there for 2 hours. On Monday we will come again to pick Mind up to school for the first day and visit Bam’s school also.

After we left Bam and Mind house, we drove to Shawano which is 1.5 hour away.
We had to get Mc.Donald drive thu because we didn’t have time to eat. We got 20 nuggets and cheese burger for only 6$. So cheap.
We arrived at George’s sister, Diane around 3 pm. and we went to the restaurant to have dinner around 6 pm.
I got Kids menu because the portion here for adult is too big. I actually couldn’t finished the kids menu, still too big for me.
The food was yummy. 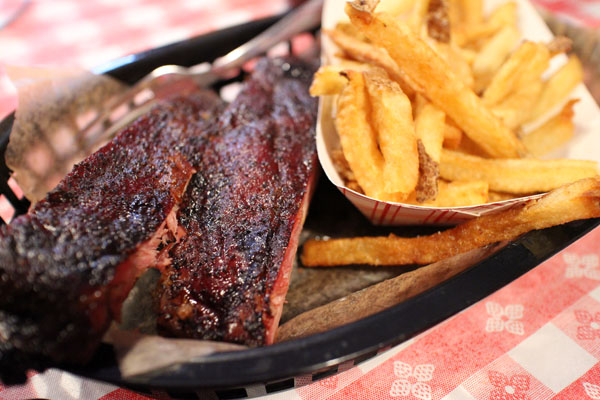 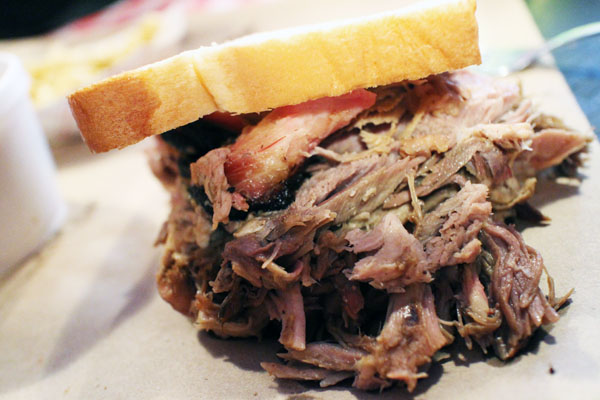 Tomorrow is Diane’s daughter, Cristin. It’s her 21st birthday and it’s the age that you can get in the the club.
So tonight Diane took her to the club in the area. It’s deep far out in the jungle. Hahahaha 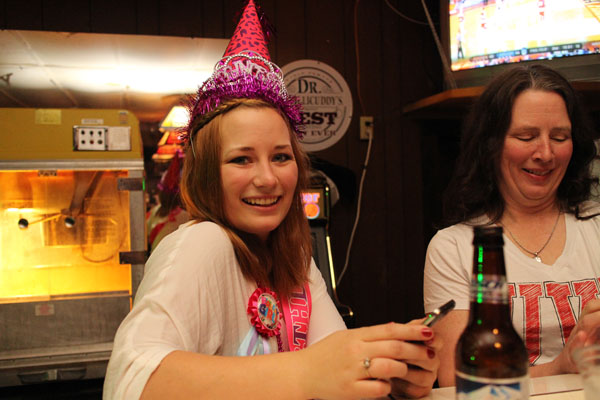 We watched the Badgers game there too. Seem like people watched the game only the last 5 minutes because it’s the time you decide who is going to win. The game yesterday was quite intent. The score of the Badgers and Kentucky were about the same. It’s a big important match because the Badgers never be this good before and the Kentucky is a good team. Finally, the Badgers won.
I think everybody who live in Wisconsin watch the game. It’s similar to Thai people watch Thai football or Volleyball team. 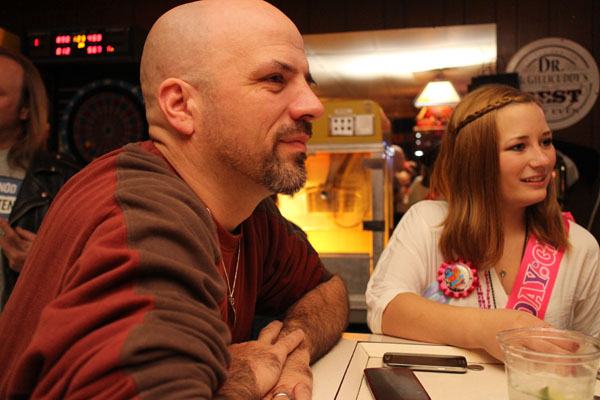 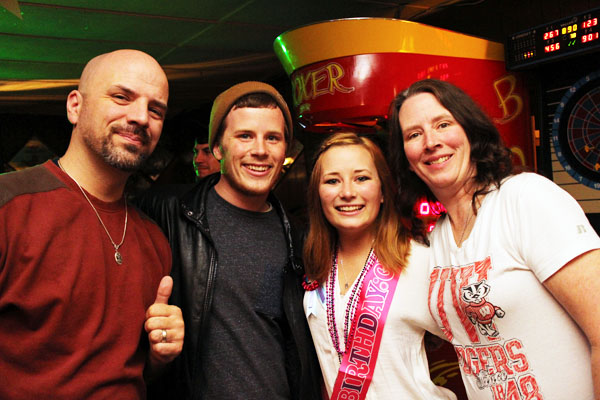 Around 11 pm., all of Diane’s daughter and son who older than 21 years old arrived at the club.
They’re having fun. George asked me to play Darts with him and his nephew and his girlfriend as a team.
I mean woman with woman and man with man. I never play it before but I managed to get a good score. I didn’t know that we have to make to point go down to 0. So even though we got a better score, we still lose. The next game I played with George. I won! Hahahahahaha Funny. 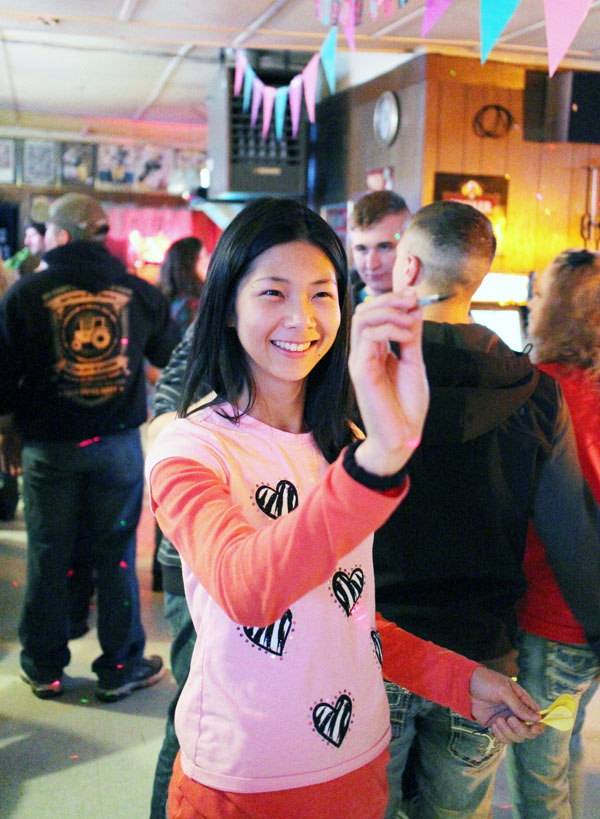 George saw his nephew’s girlfriend play with boxer machine. It’s the machine that we have to hit it as hard as you can.
So George thought it’d be funny, seeing me do boxing. He asked me to play again. At first I was afraid that I would her my hand but I wasn’t.
This was also my first time. My first hit was almost 700 which was surprising for everybody there and they think I can do better.
I tried another 2-3 times and my best score was 833! I’m at superman level hahaha. Please don’t ask about George’s score. I don’t want to hurt his self esteem even more. Hahahahahahha Poor husband 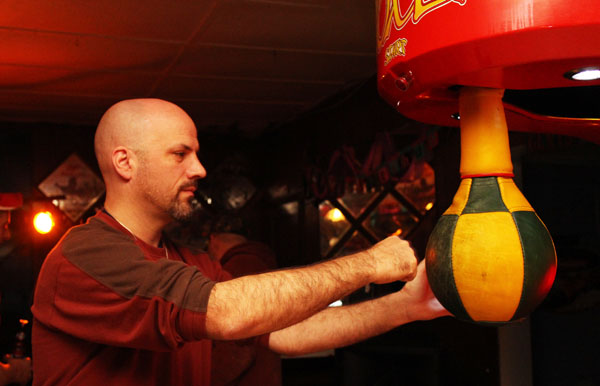 In the club here, they have the dance they called “line dancing”. It’s the dance that the song will tell you what to dance and everybody dance the same. I think that’s a good ice breaker for dancing. Hahaha

We went home around 2 am. Diane wanted to make sure everybody has somebody to send them home savely first.
George and I slept right away. It was a fun night.