We’re here, America!
I was packed for a while but George just started packing on the day we’re leaving!
We have to seal every room in our house so the bugs don’t get to our stuffs.
That’s a lot of work.

I got a phone call from Porsche’s mom about his passport. They thought his passport was with me but it wasn’t! (Already exciting right?) then Time’s mom called me and asked me it I got his passport too! and NO! I don’t have anybody passport.

Luckily that they all found passports later.

George and I rent a truck for a day just to move all luggage to the airport.
We didn’t have problem with the traffic. We took only an hour to get to the airport.
We met all the students at 7 pm. We’re so busy, collecting sleeping bags, hand our paper and name tags, snacks etc. 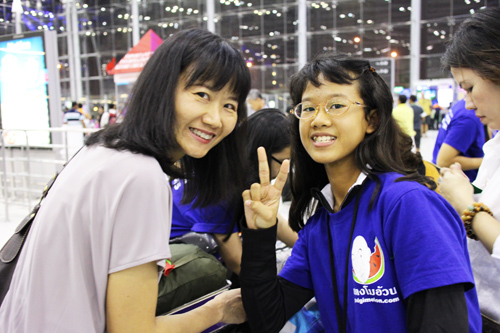 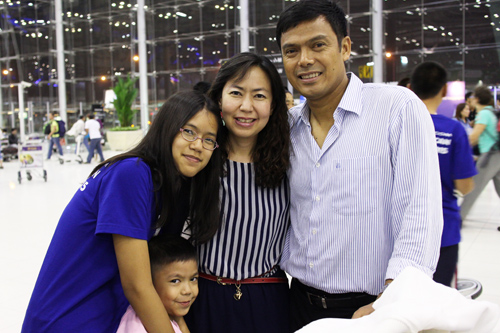 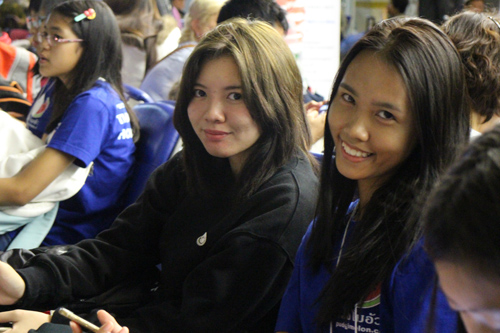 Lily was the last one who got to the airport. She got bad luck with the traffic.
We started checking in after everybody arrived. It took time.
We made it to the gate around 9:15pm. and we didn’t have time to let the kids run around in the airport so everybody have to wait for boarding right away.
The boys were a little bit sad because they saw Note Udom (Thai talk show, superstar) near our gate but they couldn’t go there hahaha. 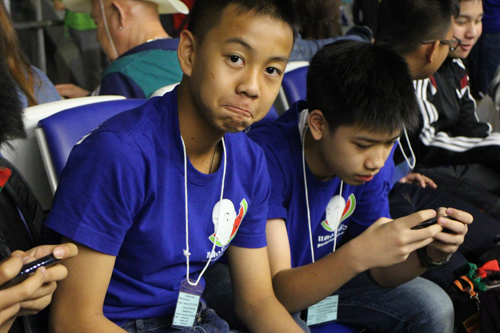 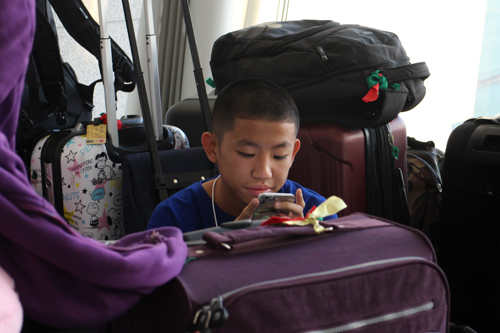 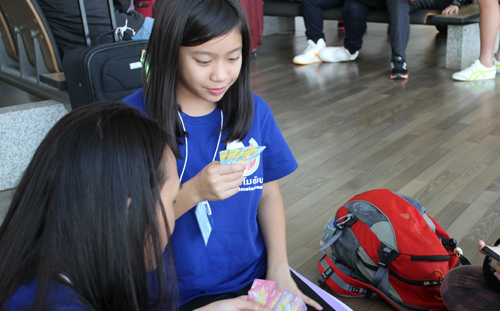 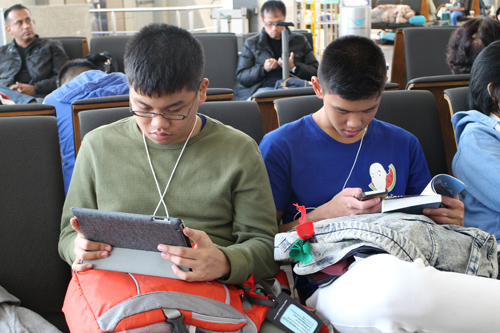 I feel so thankful with all the Thai parent that let us take care of their kid and also give us a lot of help.

Our flight from Bangkok to Korea was almost an hour delay.
The crew said there’s a traffic that they have to wait to take off.

The plane was small, I think. And the air condition was quite warm. I
didn’t feel comfortable at all. It took about 5 hours to get to Korea. I’ve
noticed many time the fights I took were delay, it always manage to
arrive at the same time schedule. 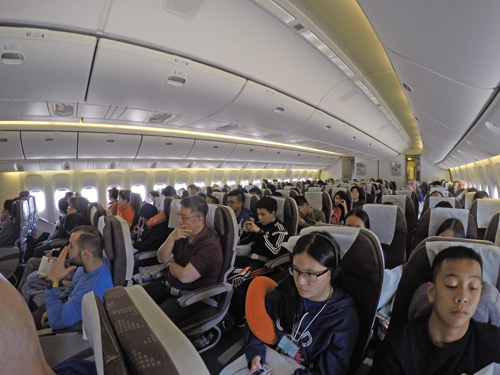 We have a couple hours at Korea airport so we let the kids walk around and relax. Some of them go get overprice soda or coffee (George and I did too). Some of them played card game. And after a while, seem like
they all just sat and chatted. How about me? I slept. Hahaha. 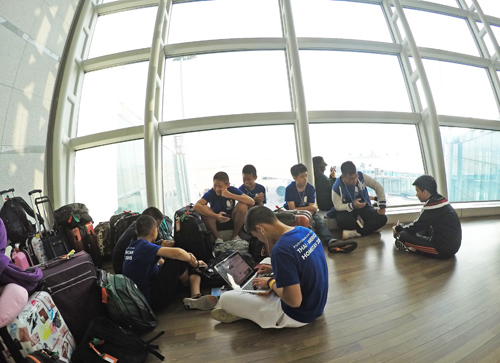 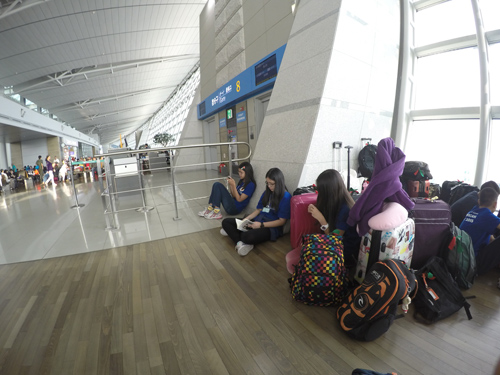 Toto woke me up because George told him to.
I wanted to charge my laptop battery and George was waiting for an
outlet for me.

Porsche came to me and ask me if I have something to stick his shoe
together. The part that on the ground came of from the shoe. I gave him
duck tape. Pooh helped taping his shoe together. Now, he got a nice cool
shoe hahahah. I suggested he did the same with the other side but he
didn’t do it.

On the 12 hour flight to Chicago, I got an extra seat again! Yayyyy
The best day of my life! Yayyy I had a good sleep because I can lay
down. The plane was bigger and cooler. 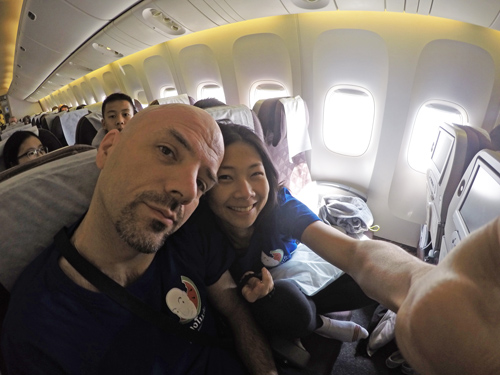 We got to Chicago around 10:30 am. The US immigration line was
soooooo longggggg. It took us 2 hours to get through the line.

The weather was cold. There’s still some snow on the ground.
The kids were excited about it.

We took Goriteway bus to New Holstien. On the way we stopped at
Oasis to get Mc Nugget for the kids to eat in the bus. George and James
got off at the van rental shop. 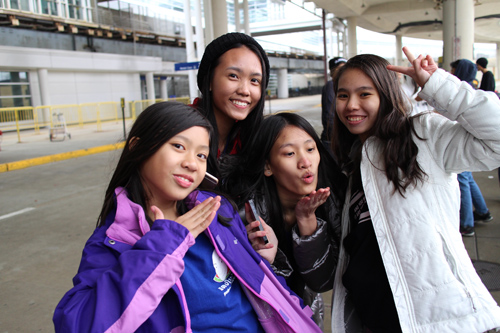 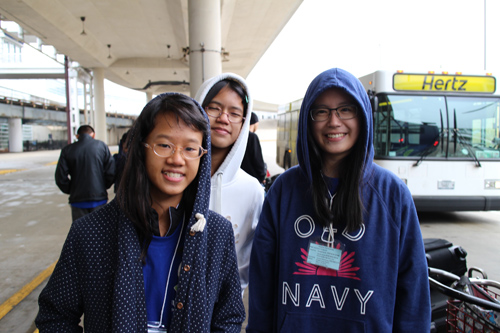 I felt so sleepy around 3-4 pm. We finally got to the school around 4 pm.
We moved all the suitcase and set up the bedroom.

Nemo couldn’t open her suitcase. I don’t know that she remember the
wrong password or something wrong with the lock but George help
open it for her. 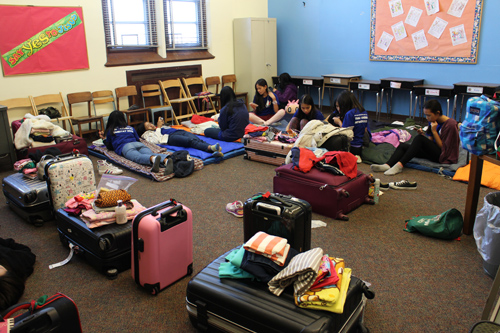 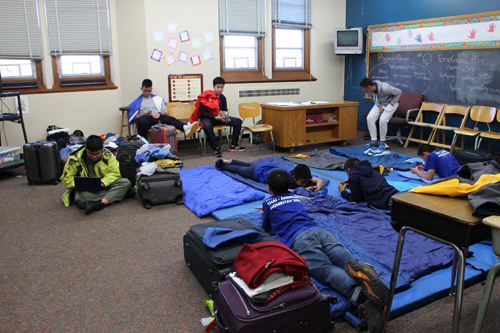 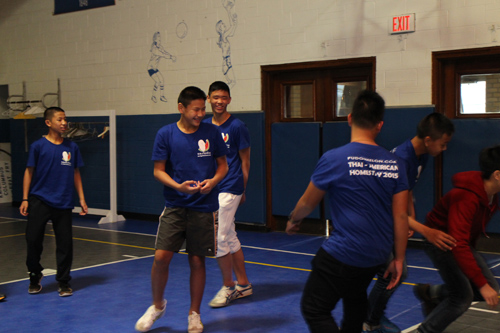 (The boys played basketball at the school gym together)

After we finished unpack, George went to order pizza and come back to
get us to pizza restaurant. I think George ordered too much pizza. We had 4 pizza leftover. 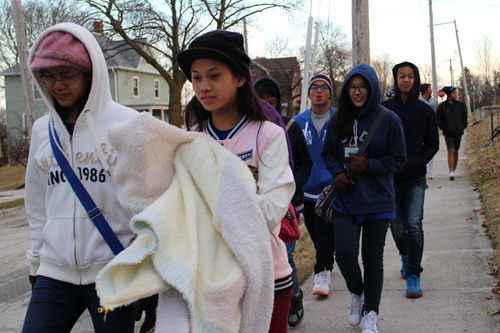 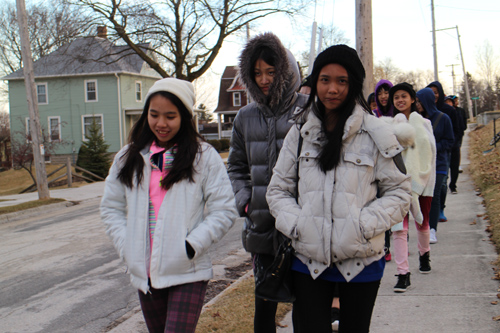 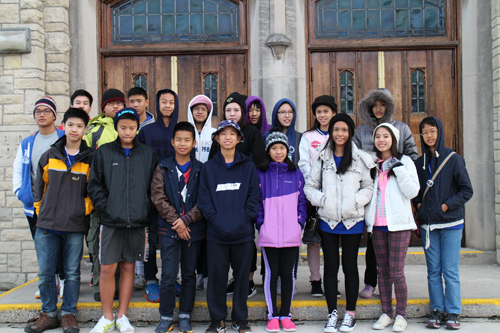 (Taking group picture in front of the school building)

We met Jan, Jean, Kay and Sandy Backus(Win’s last year host mom).
We had quite a fun talk. Jan is a Thai student who’ve been studying in Manitowoc for 8 months.
Her English improved A LOT. I totally can see the different. 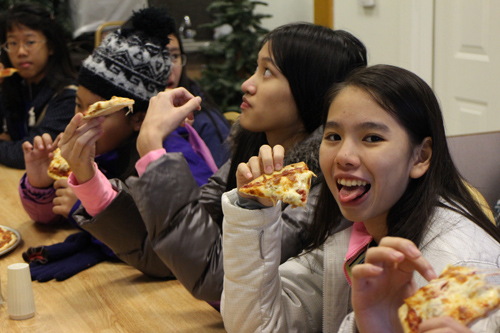 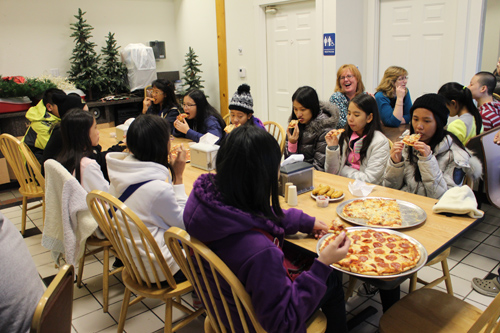 We let the kids talk to Jean and Jan for a while and we walked back home.
The temperature was colder. We found some snow. The boys started to play around with it.
George joined in and he tried to kick the snow to the kids but accidentally slip and fall hahahahaha. 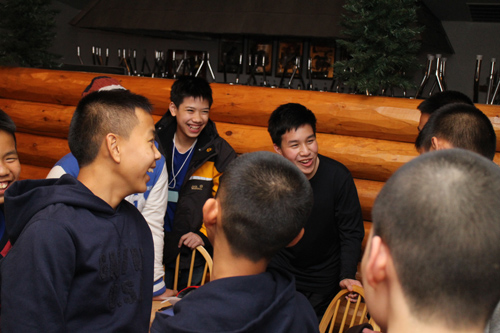 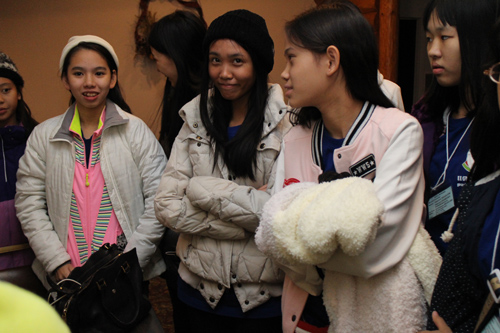 We got back to the school around 9 o’clock. We talked about our plan today and tomorrow.
The kids went to take shower and get ready to bed around 10 o’clock.
But you know, when you’re camping with your friends, it’s so hard to stop talking.
They eventually sleep around 10:30 pm.

George went to get food for breakfast and snack. And now we’re updating our blog, using wifi near the school.
So far, the kids have been really busy and we still have a lot to do tomorrow.
They will get a chance to use wifi at sometime. We’ve tried the roaming sim that we take from Thailand but since we’re out of chicago, we couldn’t use it. We’re in a really dead area hahaha.

All the kids seem happy and excited. I don’t see any sign of problem.
But let see who is going to cry tonight! Tomorrow I’ll update again.