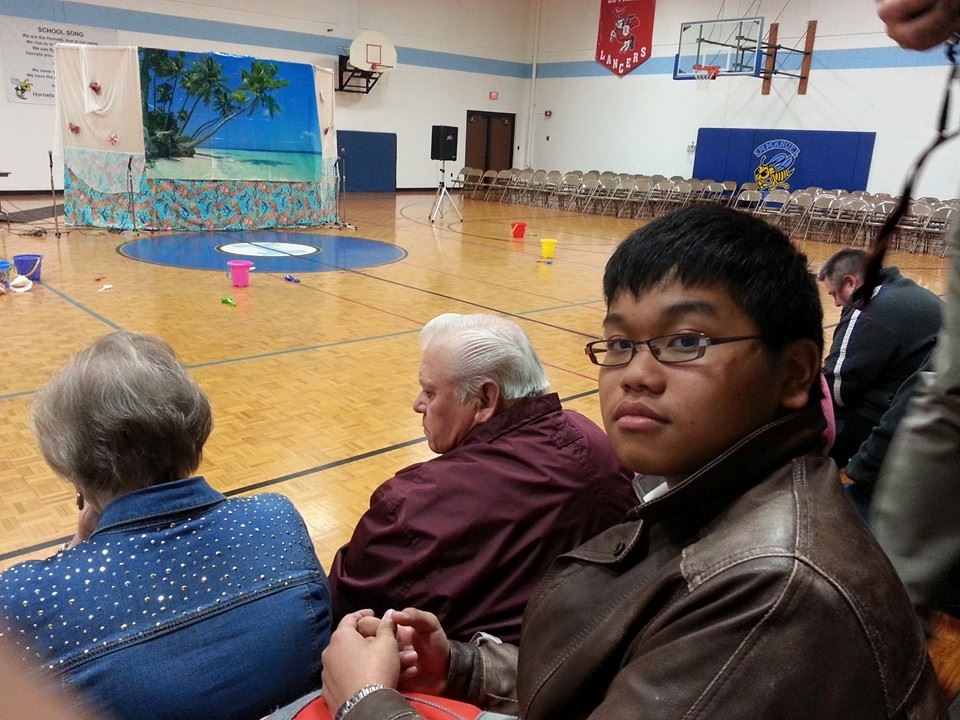 ( This Post started from  about 6 P.M. on April 24th , so please read the previous post from yesterday.)

At about 6 A.M., I woke up. I brushed my teeth and changed my clothes. Next, Porsche woke up and finish his routines. After that, both of us waited until it was almost 8 A.M. . Then, Pat just woke up. She told us that we could help ourselves in order to get the breakfast. I ate a piece of blueberry bread, a bowl of cereal and a banana. They were quite ok. Then, George woke up .  Pat told us that we could go outside ,so we walked around the apartment for about 3 minutes before getting back to the apartment.  We started to talking to George and Pat about many things. It was quite good. After that, Porsche tried to let me play Black Magic which was a game that I couldn’t understand much. At about 9 A.M., we got on the car and went to the beach. We went there , because George wanted all of us to go to clean up the beach from various types of garbage. It was quite cold there as there was a lot of wind near the beach. Porsche and I picked up a lot of things like bottle caps and others even a shotgun shell. When we were walking back to collect more things, we met up with Pokpong and Time. They said that they collected a lot of garbage too. Pokpong said that he collected a lot of shotgun shells . I was surprised by that. After that, we picked up more garbage and talked to each other about many things. Later on, we finished the cleaning operation. We also  some candies too. They were quite ok. Then, Pokpong  and Time got on their host’s car I presumed. We also felt that it was quite cold too. So, we got on the car with George and Pat. I thought that I was freezing my hands.  Then, we went to the Manitowoc Public Library. I updated my blog there. After that, at about 12 P.M., we went to have our lunch. We went to Warren’s Cafe. I had a Hot Dog and a bowl of chicken soup. They were quite delicious. Porsche also colored a picture too. It was nice. After that, we went to the YMCA building in Manitowoc in order to go to swim. We  first met Junior and Plakaow there. Next, all of us changed our clothesw and went to the swimming pool. We had  some fun there. In the pool, we  met Bam and Mind too. Everyone was playing by throwing a ball at each other. Then, Pokpong and Time came in. This made things a lot more fun. Everyone played for some time. After that, Nemo and her friends came in too. We played the Monkey with a Ball game. It was quite fun, but I got a leg pain from it. I managed to recover from it somewhat. After we finished swimming, we changed our clothes and went to the Racquetball court. I watched as Porsche, Pokpong and Time played with their racquets. It was an interesting type of sport. Next, Porsche, George, Pat and I got on the car and went back to the apartment to put some of our stuff there. Pat also gave me some cream to put on my leg. That was nice of her. Then, we went to Shawano to attend a car race match. We talked a lot on our way. It was quite nice.  When we reached there, we went to Bubba’s BBQ. I had chicken tenders and Mac and Cheese. They were quite nice. George and  Pat also gave me some pork too. They were also nice too. At first, I didn’t know that I should return the bottles I used to the restaurant, so I disposed it, but George told me not too, so he picked it up and put it on the top of the disposal box. I felt somewhat  bad for it as I didn’t know it before. Later on, we went to the race track. George just found out that the Race was cancelled in Facebook. He checked the schedule in the website ,and it didn’t say that the race was cancelled. We were somewhat disappointed by that. So, we drove to a movie theater to watch Paul Blart 2. It was a comedy movie about a Mall police officer having a conference in a resort located in Las Vegas. That officer also defeated a group of professional armed robbers trying to steal the valuble artworks in the resort. It  was quite funny. I liked it. After we finished watching the movie, we went to MacDonalds to upload our blogs again at about 10 P.M. . I was quite tired by that. Finally, we went back to the apartment and slept   there at about 11 P.M. .