Lately I have been waking up earlier, like 8 am. I ate cereal for breakfast as usual and packing up for my girl night with Kay. I didn’t cook our lunch because today we had to pick Nemo up from school before noon. Her school finished early today and her host parent had to work until 3-4 pm so we had to take care of her during that time.
We decided that we’re going do home visit with Nemo today too.

We’re at Nemo’s school at 11:30 am. Nemo came downstairs from her class with Emma. She met us and said good bye to Emma. We walked outside together. Nemo showed us her playground. She said she can climb up on the monkey bar and it’s cool. So we asked her to show us.

After that we went to our car, Nemo said our car looked so cool. Hahaha George told her because we’re a cool host family. We took her to lunch. George suggested Chinese buffet but I remember last time he had it. He said it wasn’t good. So I told him to go to Panda Express better.

Nemo and I got Kid’s menu. We choose rice and grill chicken teriyaki. I couldn’t finish the whole dish but Nemo can. She can eat a lot!

On the way we came to Panda Express, Nemo asked me what is “Creepy” mean? I asked her where did she heard it from. She said she was watching movie and the guy in the movie smile weird and her host sisters said creepy. So she think it means scary. Hahahah

When we were at Panda Express, she asked again. She said the word “Kan Daf” mean same, similar right?
I was confuse for a little bit before figure it out. It’s “Kind Of”, I said and she said “No no, Kan Daf”
I told her it was a same word. She wasn’t quite sure until I tell George to said “Kind Of” then she said “See! Kan Daf”
That was funny. 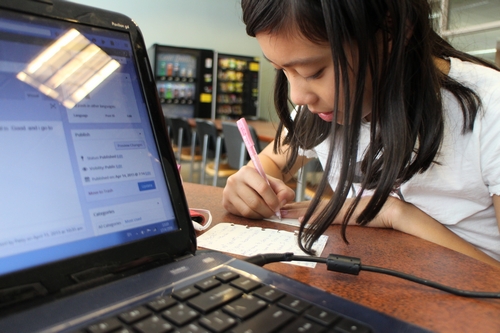 After lunch, we took her to the library to use the internet. I sat down with Nemo and go through her blog post that she is missing. Only the special day that I know she’d remember like “Easter”, “Baseball”, “Game night”
I asked her to put more detail and answer the question “When,Where,Who,Whom,Why,How”.
If you’re interested, you can go to her blog’s post and read it again. I didn’t help her with vocabulary or grammar.

We were at the library until 3:20 pm. then George dropped me off at Holiday Inn Hotel with Kay.
I had a girl’s night today. It has been 3 years for me that I will stay overnight with Kay and more other girlfriends.
It’s Kay’s birthday celebration.

After George dropped me off, he went to Nemo’s host family house to dropped her off too.
Also he did the home visit, taking video and pictures. 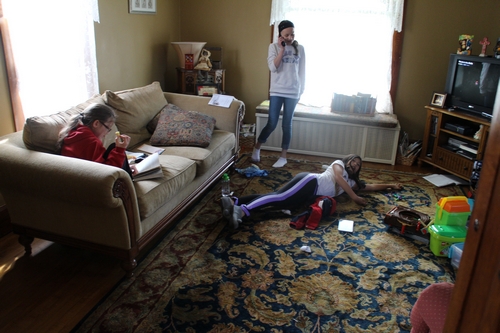 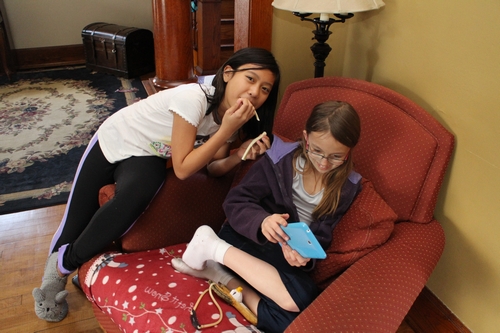 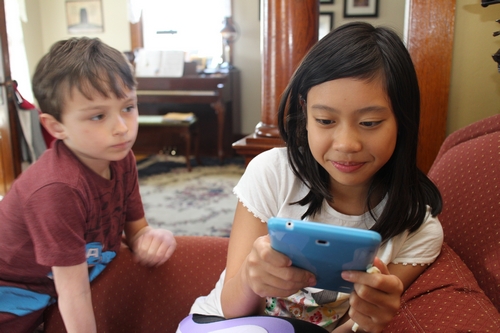 I and Kay went to Good Will to buy our 80s Roller Skate outfit for tomorrow night.
We didn’t spend so much time there but we got everything we need.
It’s so different when I came with George. We didn’t get anything.

After that we went to Food Festival to buy food. We’re hungry so we bought a lot of food and snack.
We’re back to the hotel and found that one of Kay’s friend was waiting.
We started the party with eating our food. I bought 8 fried,grilled chickens. I only ate 2-3 of them.

Around 7 pm., everybody was arrived. All we really do just talking and talking about things, husband, kids, wife, school, old time, etc. We tried to take group photo at the end before everybody left. Kay and Joann went down to the bar to get the guys, (Viggy and June husband) But they didn’t show up so Viggy called her husband herself.

It turn out that they’re drunker than us. We didn’t really drink at all I think.
So it’s really hard for them to take a good picture. It was so funny.
We didn’t get a perfect picture but some of them were OK.

Around 10:30pm., they’re all gone. There are only me and Kay slept here.
Kay gave me the main bedroom and she slept at the couch. The bed was really big and the room was actually big. There are full bedroom, bathroom, kitchen and living room.
I think it’s probably for a business person who has to stay here for a week or more. So they can feel like they’re living in an apartment.