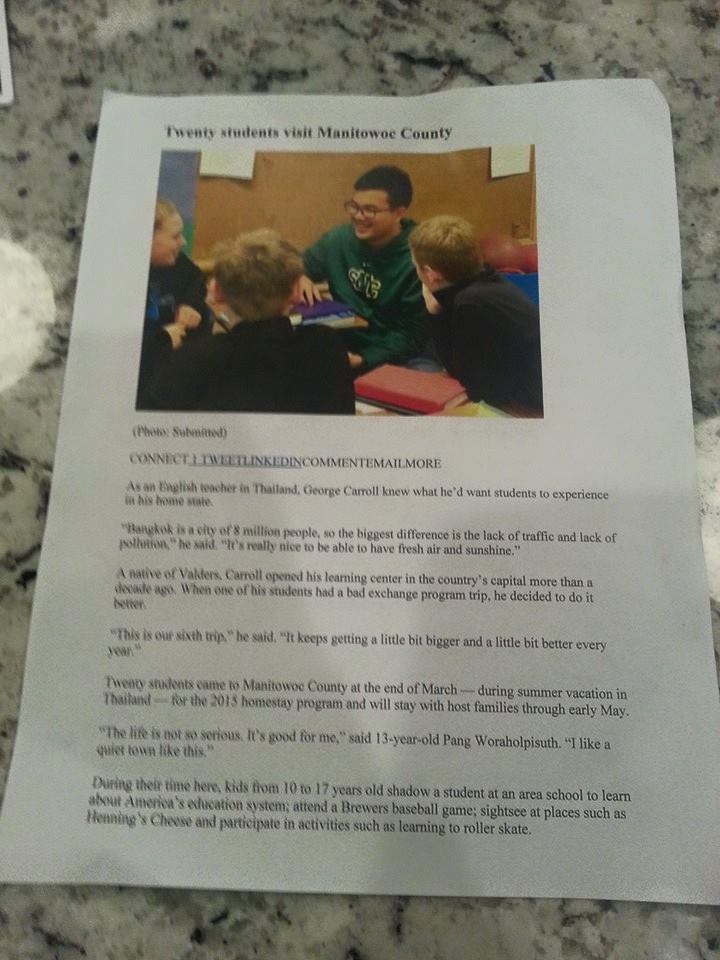 Today, I woke up at 6 A.M. . I opened the lights before brushing my Teeth and  changing my clothes. Next, Porsche woke up. Then, both of us had our breakfast. It was some cornflakes with milk. They were quite delicious. Then, Tricia, Porsche , the kids and I went to Megan’s house. We picked Megan up. After that, we reached the school. The three of us walked  into the basement. We met Jensen there. After the bell rang, all of us went our lockers and put our stuff their. Then, Megan and I to the Spanish class. Today was actually the Earth Day which people would try to save the environment. Ms. Doll opened a video about the day’s history. It was quite interesting. Next,  she led us finish some exercises about words by matching  a term with its meaning. I managed to do some of them. I also helped Megan her friends in the process. I even answered some of them in Spanish to Ms. Doll. She said  that I was good in speaking and pronouncing in  Spanish even without any education about Spanish before. Ms. Doll told me that there was a local news article about Thai students including me. This article was quite interesting too. I was wondering if it was the first time I was mentioned in a news article.  She printed one for me. That was quite nice of her. I was sure that I would keep for a long time. Then, Megan and I went to the  Maths class. Ms. Leick taught us more about the equations for the parabolas. Now, I thought that I should be able to solve the equations that I was confused with yesterday. I also finished some more equations. Later on, we went to the Cooking class. We joined up with Jensen and Porsche . We had a nice chatter along with Aaron before the teacher started talking. Megan and Jensen made the whip  cream which would be eaten with the cake we made on Monday, while Porsche and I prepared the table. Next,  we brought the cake and ate it with whip cream and strawberries. Everyone got 2 pieces from the cake. It was quite nice. We also had some fun in talking  too. Guess who had mop up the last of the whip cream and the strawberries? It was actually Megan who mopped them up.  Next,  we began to clean things up. Megan told me to lick the  rubber scraper with whip cream. I did lick that thing. Then, I decided to prank a little bit on Megan. I pretended as if  I was going to use that scraper to hit her back. I  didn’t do it. Porsche and Jensen was laughing at it.  Next, we went to the Art Class. Mr. Pendergast told to everyone that they should finish their work. I finished my work , so I didn’t have anything to do except for talking more about Thailand to Megan and the others. After that, Megan and I went to the English class. Mr. Larsen introduced us to the static and dynamic characters in a book. He also led us finish our comments on the Article of the Week. It was about the controversial religious-liberty laws in Inidanapolis. I felt that there should be religious freedom, but there shouldn’t be the freedom to treat others unfairly. Then, I proceeded to read Force 10 from Navarone again.

Later on, Megan and I went to the cafeteria.  We decided to have our food microwaved first. After  that, we brought our food to the table. My lunch was 4 mini cheeseburgers . They were quite nice. Then, I started talking to others. Later on, the bell rang. Megan and I went upstairs. I went to the toliet before going back to the class. When I came back, the door was locked. Luckily, a student in that room opened it for me. Another teacher also experienced the same problems too. After that, I continued to read my book. I found out that the Allied team found out that the 2 German Tank Divisions weren’t in the area the British bombers were bombing. Instead, the things they bombed were fake German tanks. So, the Allied commandoes decided to blow up a dam which could flood those  Panzer Divisions. They succeeded in doing that . The German general in charge of the 2 divisions was killed too. The Chetnik and the German commanders who followed the commnadoes seperated, because the German commander was wounded. The Chetnik commander had a knife fight with a Greek colonel who was in the Allied team. The Greek colonel killed him. The German commander was too late to arrived and inform the German general about the possible destruction of the dam. So, he couldn’t do anything, while the Allied team including a Yugoslavian partisan commander flew back to Allied-controlled Italy. It was quite an interesting book. Megan was in disbelief that I managed to finish the book in 2 days, but I told her that I just scanned the book. Next, we went to the history class. Mr. Romatowski led us finish more notes and exercises about the U.S. after WWI. It was ok. I also had to prepare for the test tomorrow.  After that, Megan and I went down to the Science room. Today, Mr. Filer led the class do an exam about the elements and the periodic table. I didn’t do that exam, but I observed that some sections could have been done by me, except for the parts about shells, the amount of neutrons and some experiments about elements. After the class was finished, we went upstairs to get our stuff. We met Porsche and Jensen there. I joined up with Porsche and waited for Tricia. At about 3.10 P.M., Tricia picked us up. Then, we reached the house. We relaxed before having our dinner. Our dinner was the Thai meals we ordered form Sunday. For me, it was Phad Thai. It was quite delicious. Next, I updated my blogs and reviewed about history. Then, I packed things up for Friday before going to bed.