This morning we woke up early because we have to pick Mind up from home and drop her off at school for her first day school. Her host mom has to work at 6-10 am in the morning so she couldn’t go to Mind’s school today. Bam went to school with Jadian. They go to the same school. Jadian tried to tell us what to do. She said make sure you have the name of Mind’s buddy so Mind and find them. She acted like mother hahahaha. 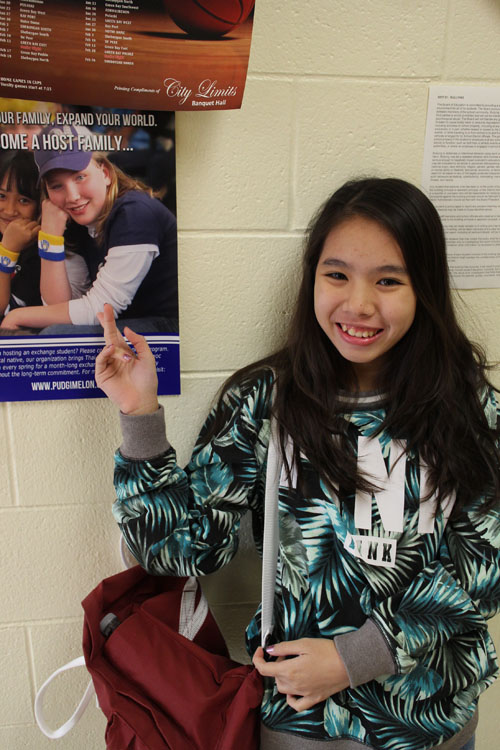 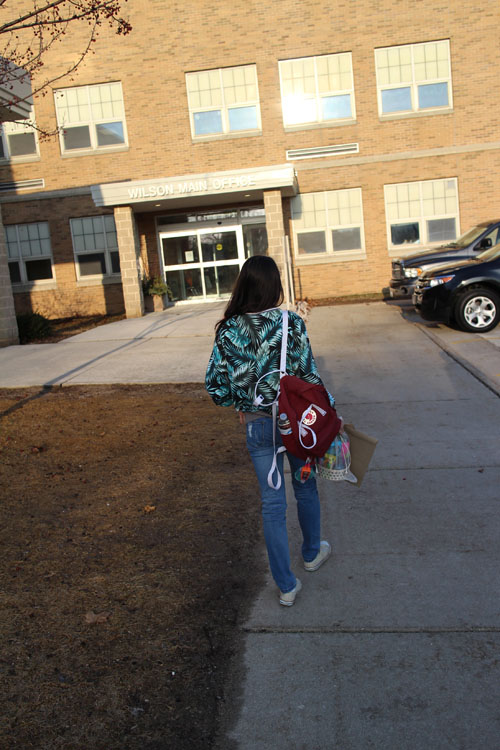 We was at the school around 7:30 am. Mind’s school is very close to her house. She can just walk if she wants to, not on the first day tho.

Mind said she wasn’t nervous but I think she was. Her host mom made her bring lunch from home but if Mind or Bam want to get hot lunch at school that’s fine.
It’s just sometime it takes time to get lunch at school because the line is long. So she will let Mind and Bam make a decision what they want to do.

After we got there. The school announced Mind’s buddy name to come meet her at the office.They have 2 buddies for her. One of them show up and took Mind to introduce with the other buddy at her classroom. They both seem really nice, friendly and polite students. The school assigned 2 buddies for her because if one get sick or can’t take care of Mind, the other will take care of her.
The school staff was really nice. She will set up a locker for Mind and teach her how to use the locker. She also asked about who is going to pick Ming up after school so she can bring her to the right door and wait for that person with Mind. She gave us her and the principle personal phone number so we can contact them easier. That’s really nice.

Mind’s buddy talked to Mind a lot but Mind mostly smile and smile. I think it’s a good idea to separate Mind and Bam from each other at school so they can stay on their own. And it forced Bam and Mind to talk to somebody else. I’m sure they can’t be quiet all day without speak. Hahaha 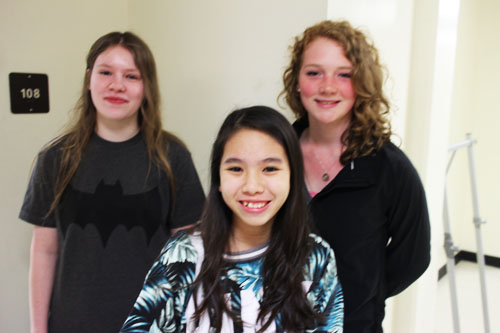 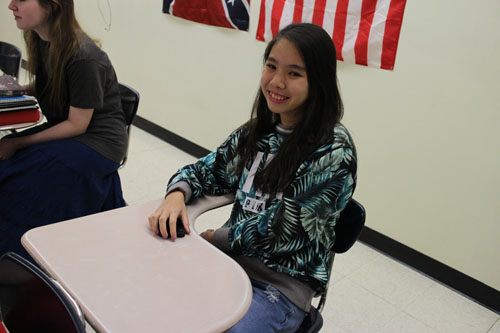 We didn’t want to take too much picture or video in her first class.
We know it can be awkward and uncomfortable, specially on the first day like this when you don’t know anybody.

We went to Manitowoc Coffee to get some email and work done(They have WiFi).
George ate potato soup and hot cocoa. I got hot cocoa with cream.
I felt sleep so I took a little nap until George woke me up. 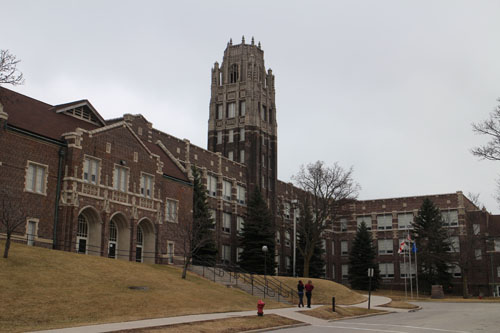 Around 12:30 we went to Lincoln High School. We visited Muk and Bam. It was her first day school too.
We talked to the principle for 30 minutes before we went to Muk’s classroom. Bam was in there too because Jadian went to her Orthopedic appointment. They’re about to go for lunch and meet Jadian at the school office so we followed them around.
Bam went with Jadian after we met her at the office. Muk went to get lunch with Alexandra. 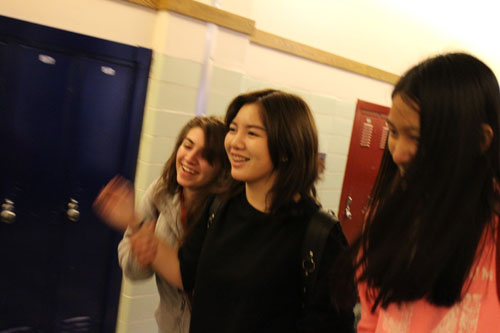 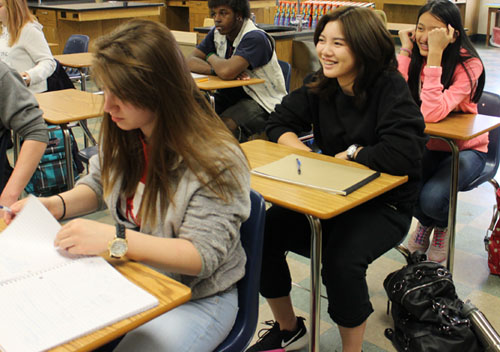 Muk looks really happy with Alex. She fits in very well with Alex and friends.
She doesn’t look like this is her first day at school at all.
Since she has the trip to St.Louis this Wednesday. she has to be apart with Alex and her host mom.
She was so sad. She really attached to her host family.
Alex took a good care of her and spoil her a lot. 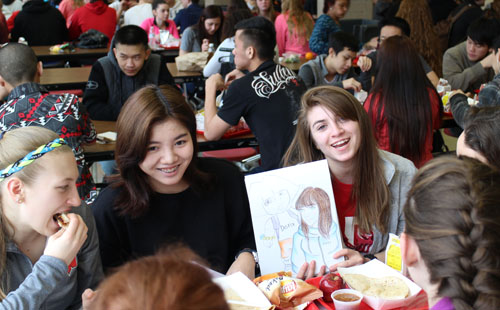 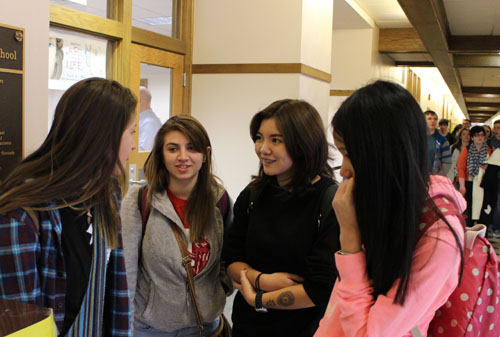 We went to Bam’s class after that. Bam brought lunch to school and eat in the classroom today.
Bam is in grade 12 with Jadian. It might be hard for her but again she is here to just make friends.
The English will come when she talks to friends but Bam is kind of quiet when she wasn’t with Mind.
I think this can be hard for her but she will get through it.

They’re studying about the war. The teacher who was teaching was very good. He asked a lot of “Why” which is not happening in Thailand education. We don’t really force the student to think in Thailand. Mostly just memorize and test. The students here gave a lot of good answer and tried hard to think and answer the questions. 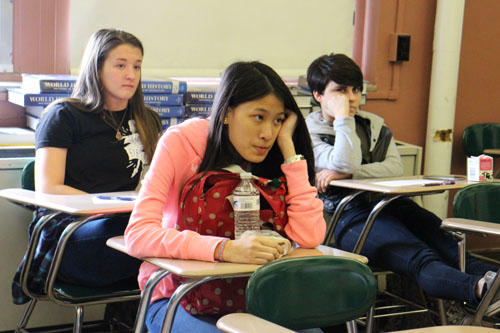 After visiting Bam, Mind and Muk, we went to visit Time at his school.
He was in music class, interesting! I like to take photo and video in music, art or sport class better but we can’t always get it.
Time was really happy. It’s his first day also but seem like he fits in already. He said his buddy “Dillon” was really nice to him and he is a cousin of his host family too! So he met him before at the Rollair! Small town!
Time seems to have fun with his class and his friends. His friends already joking around with him. He smiles a lot. 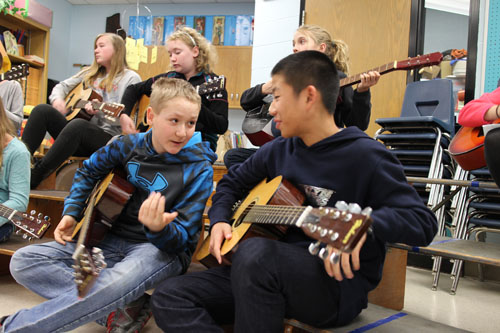 (He learns to sing and play  guitar)

We finished at his school around 14:45 pm. We can’t go to more school because most of them finished around this time.
We went to eat because we didn’t eat lunch today. We were so hungry.

After late lunch, we went to the bank and went to card game shop.
George bought some game and cards. Nothing was exciting until we’re about to leave so I went outside and wait for George to pay his bill. While I was waiting, I heard his phone ring. It sounds like a message so I took it out from my pocket and I dropped his phone!
That’s not enough!  I cracked the screen too! Whattttt!!? He dropped it like a million time but it happened to crack when I dropped it.
I was so sad. George didn’t get mad because he was getting more Magic card. Hahaha He’s being nice to me. 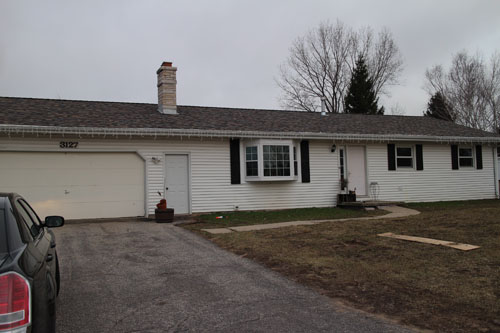 We went to Time’s house around 6:30 pm. We’re kind of lost for a little bit because the road to his house was complicated.
We met all the family members. I can see why the first week Time fell like he’s overwhelm. His host siblings are young and they’re loud.
And the first week, Time didn’t have school so he had to spend time with the kids a lot.
His host mom said he did really well. She knows it wasn’t easy.
Now everybody goes to school. Time goes to school. He have a lot more fun. 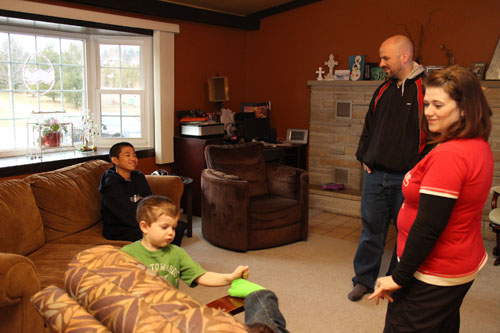 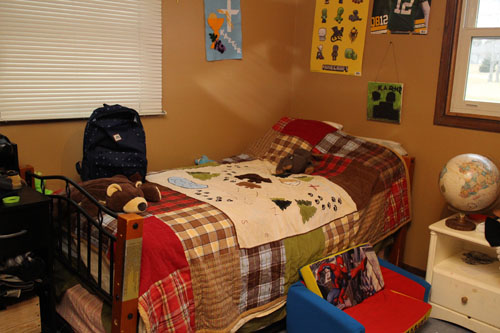 Time showed me the chicken farm in the back of the house. They have a lot of space to run around.
He showed me the house, his bedroom, basement, bathroom and also the pictures of the kids in his phone too. 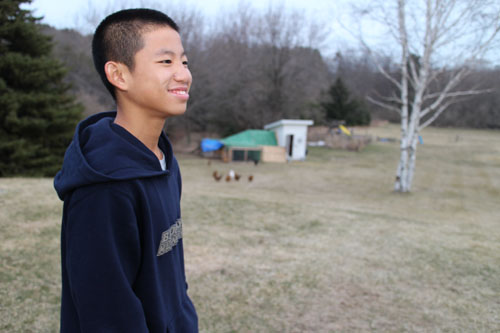 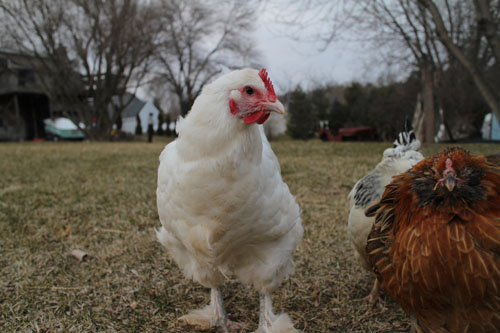 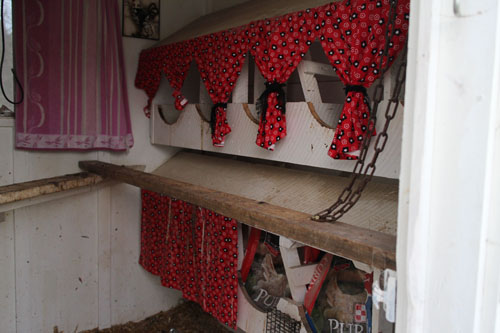 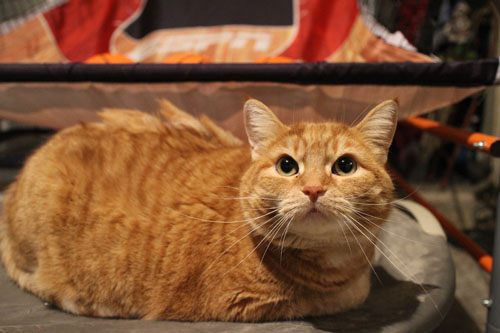 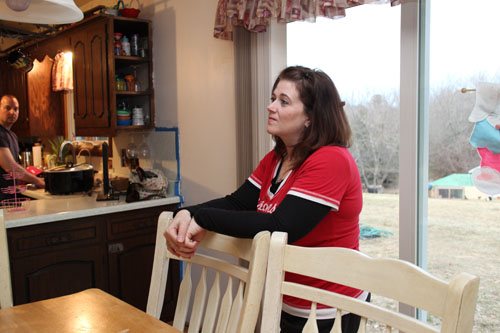 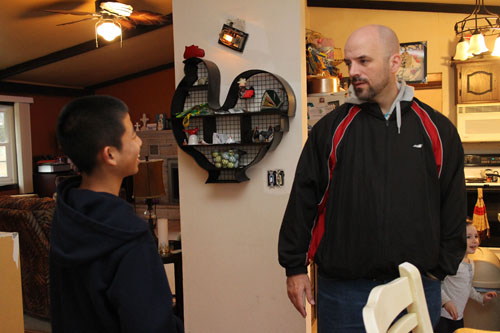 After visiting Time, we went to Muk’s house. Her house wasn’t far from Win’s and Time’s house.
Muk and her host family were waiting for us. We can see when we parked the car. They’re looking at the window. Hahaha

We talked to Muk and her host family. They’re really happy. Muk and Alex get along really well.
I think they’re a good match. GEORGE DID A GOOD JOB. 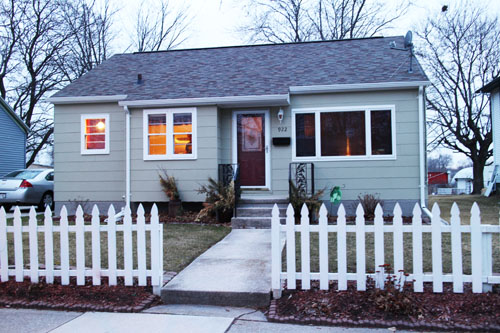 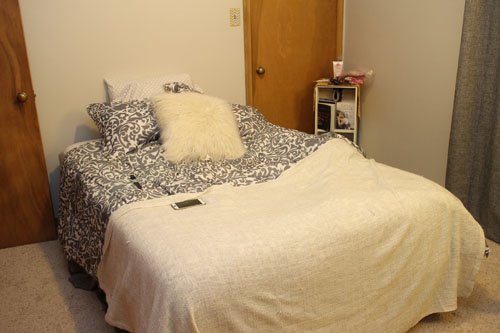 Muk and Alex laugh all the time. Muk called Alex “Mom” now because Alex takes care of everything for her.
We asked them if they try our Thai snack gift. They said they’ve tried seaweed and they didn’t like it. Alex’s boyfriend like it.
They didn’t try spicy mango so we pushed them to try. Alex didn’t like it but her mom and her boyfriend said it’s OK.
We didn’t stay too long because the Badgers game was going to start. 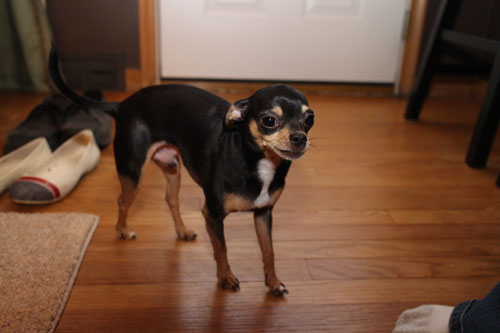 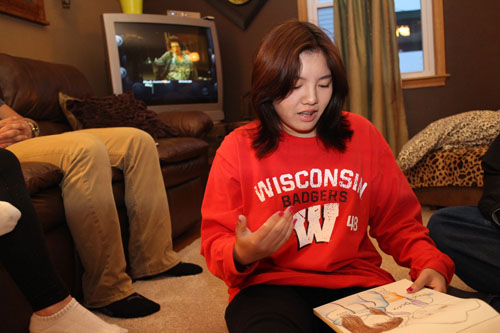 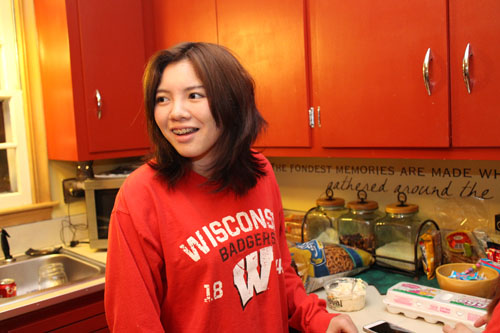 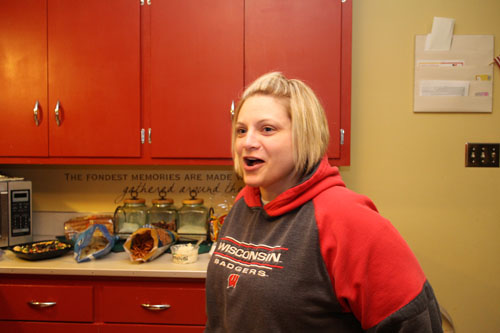 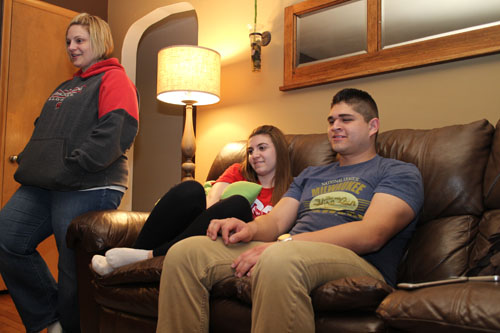 I talked to Muk in Thai a little bit. She said she was homesick so much but not much now anymore.
She said missing Thailand is not going to change the situation or move her back sooner.
I agree and it’s a good attitude to be happy here. She likes her host family very much. She said the school has sport and she didn’t like sport. Also American school you have to walk to class. Muk doesn’t like that because she doesn’t like to walk and her school is big. Hahah
I think most of Thai doesn’t like to walk.

We went to eat at Applebee for dinner. They have wifi and outlet here. Nice!
We can eat, watch the game and work in the same time.
The Badgers game today was so intent. The score was so close. The Badgers lose tho.
Everybody is going to be so sad.