Tuesday morning it was raining and windy, so that meant we would not be going to the zoo as I’d planned. Instead we headed over to the library again and hung out there for a bit. When I went to get the kids for lunch, they were all huddled together in one booth playing on their phones, so I had a talk with them about that.

We walked down to a BBQ restaurant and ordered some pulled pork sandwiches. In spite of it being on the kids menu, it was more than they could eat and they were all very full. The food was very delicious and they really enjoyed the sandwiches and macaroni.

After lunch, we walked over to the game store and played a game. It was called “Pix” and it was similar to charades or pictionary, but they had to use pixels to draw the pictures. They really liked the game and played several rounds. I think I might buy a copy to bring back to Thailand. I like using games like this when I am teaching conversation classes, because it really encourages the kids to talk. 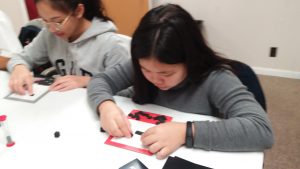 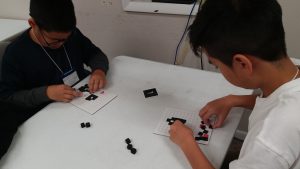 After the game shop, we walked over to Beernstens Chocolate and ordered some ice cream sundaes. I may have broken my diet there, but hopefully, Pat will not find out ;). We went to the roller skating rink afterwards and most of the kids were very excited give it a try. However, after a few rounds, DD and Ohm gave up and sat around watching the other kids. The Estrella family was there too, and so Phop and JT hung out with their son. Phop also did a good job making friends with some of the other boys who were skating.

Kay Larson showed up with Plakaow (Nick), a former Homestay student who is now attending Roncalli. We had met them at Beernstens and Phop seemed really impressed with Plakaow, since he spoke English very well and he seemed to have an American style.

I had to have a talk with DD about her phone because instead of skating she was talking with one of her friends in Thailand. I think on future trips, I may just ban sim cards altogether because the kids who have them seem to have a hard time controlling themselves. The roller skating rink did not have wifi, so if DD didn’t have a sim card, she would have been forced to occupy her time in some other way. She didn’t have to skate, but she could have chatted with her friends, tried to make an American friend, play some video games, or something else. But since her friend in Thailand was able to call her, that’s what she did instead. So I talked with her about it. I told her to put the phone away and to focus on America, not Thailand.

The roller rink was not too full this time. Mostly just little kids, a couple of teenagers and a few adults, so the kids were able to skate around without a problem. Nana seemed to have the most experience and she didn’t fall down much. Phop fell down about a billion times, but I told him that the more he fell down, the better he would get, so he seemed quite happy to fall down a lot, and by the end of the night, he did get better! JT and Nake spent the night holding onto the walls as the slowly made their way around the rink, but eventually they got better too. 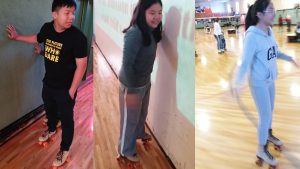 After a bit, I noticed DD was back on her phone. So I took it away from her. She said she was only shooting video with it, but I was pretty clear with her that I didn’t want to see the phone out at all, so I took it off her and told her she’d get it back after a day or two. She cried and sulked about for the rest of the night, but hopefully the lesson will stick this time. 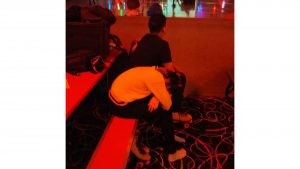 After skating, Mr. Estrella drove us home in his van. When we got home, I told the kids to get ready for bed. It had been a long day, and they were all very tired. However, after about 15 minutes, the kids came down and told me that Nake was homesick and crying. Apparently, instead of getting ready for bed like I asked, she decided to call her mom (her phone had a sim card too). I had warned the kids about phones and told them that phones were the enemy of happiness, but I guess they need to learn that lesson for themselves.

I gave Nake a few minutes to talk with her mom, and then I told her to put the phone down and get ready for bed. I knew that most of her emotion was just from being tired. All she really needed was a good night’s sleep and she would be fine. Hopefully, next time she will just go to bed instead of picking up the phone.