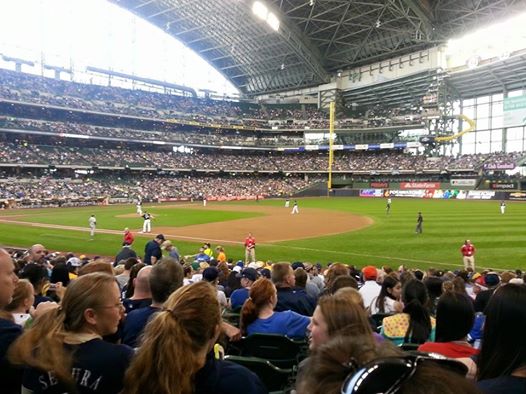 Today, I woke up at about 6 A.M. .  Porsche woke up after me as usual. I did my  businesses as usual. After that, Tricia’s parents met me again. I relaxed  a little bit and worked further on my homework. Next, I ate my breakfast. It consisted of English muffins,some bread and fruits. Tricia told to me yesterday that Porsche and I had to  leave the house at about 7.30 A.M. . So, Tricia, Porsche and I left the house along with some food and 2 chairs right after breakfast. First, we went to Pat’s Apartment in order to Plakaow,her and some stuff. We had some conversations on the car. I learnt that Porsche and I would move to stay with George and Pat on the 24th of April,but we would still stay on the same school. Then, we reached the parking lots of Holiday Inn Hotel which was the meeting point for the students and their host parents. We packed the stuff on the school buses which we would ride to the Miller Park Stadium. Tricia wouldn’t be coming with us, because she was pregnant. So, Porsche and I was under the jurisdiction of George and Pat. I expressed some concerns about my blogs that I wouldn’t be able to finish them on April 12th. So, I decided to finish the 2 blogs on April 13th. Later on, I met more Thai students and got on the bus along with other students and host families. At about 11 P.M., we reached the Miller Park Stadium which was the home of the Milwaukee Brewers. This team was one of the Major League teams. Our group began unpacking and started a tailgating event which was an event which people brought food  to eat near the stadium along with chairs and tables before watching a match. During that time, I ate some potato salad and another type of salad. I also ate a sausage and 2 burgers provided by George and Peem’s host respectively. Later on, I also drank some soft drinks and sat on one of the chairs   I brought.

Next, at about 1 P.M, we packed our stuff up and received our tickets. Porsche and I walked with Geroge and Pat to the stadium. When, we reached the stadium, we passed the security check points and walked to the seats. I went to the toliet before going to the seats with George, Porsche and Pat.  Porsche and I discovered that we would be sitting with the rest of the Thai boys. We were ok with it. When, we reached our seats, we found out that this would be  a match between the Milwaukee Brewers and the Pittsburgh  Pirates. I didn’t know much about baseball, so I just kept looking around. After that,the announcer began promoting veterans and other things. Next, everyone began singing the Star-Spangled Banner. A young girl led the singing. Everyone liked her singing. After that, they began the match. At first, the Pirates managed to score a point, but the Brewers scored a home-run, so they got 2 points. Later on, it became a stalemate for some time. Next, the Pirates began scoring more with 3 more points, while the Brewers didn’t score anything for the rest of the match. In the end, the Pirates scored 6 more points. This meant that they won 10-2 against the Brewers. The people began to feel very diappointed about the Brewers and left the stadium before the match ended. After that, we went to run on the stadium and regrouped with other students and host parents. At the outside,  a person took a group photo including George and Pat. After that, we got on the bus and went back to the Holiday Inn parking area at almost 7 P.M. . Tricia picked us up later on. After that, we went to the house and had a dinner. Our dinner was some pizzas. Later on, I updated my blog about yesterday and went to bed.