Today we woke up early again. I didn’t get to sleep late at all this week. We’re so busy.
Somehow today Toto tried new way to make sound with cereal bag to make me know that he’s up. I give up!

The boys didn’t have to make lunch today because they’re going on a field trip to Mexican restaurant in Sheboygan.
They’re going to order lunch in Spanish so we just gave then 10$ each.
After we dropped them off, we went to pick up Pee(Win’s mom) to Manitowoc Lutheran High School.
She was thinking about sending Win to study here full time so she wanted to visit the school.
Carrie, the international coordinator took her a little tour for 45 minutes.
George and I just work on our computer during that time.

After they’re all done, we went to St.Norbert College in De Pere to meet with the director of International student department. We talked and discuss about many things then we went to have lunch there around 10:30 am.
George was hungry and we had to wait around until 11:30 am. anyway.
George went back to meet another International coordinator and we leaved St.Norbert around 12:30 am.

We went to visit Praewa at school in Denmark. She was at the end of her class before having lunch.
We didn’t get a picture of her in class so we had to wait until she finished lunch.
Praewa wasn’t happy to see us. She was really shy about having 2 camera follow her around in the school.
We tried not to disturb her so much. 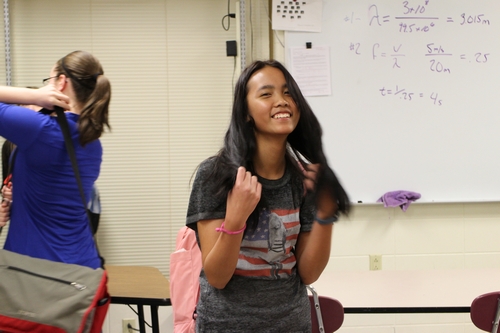 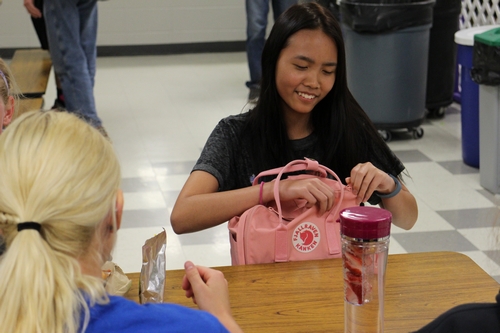 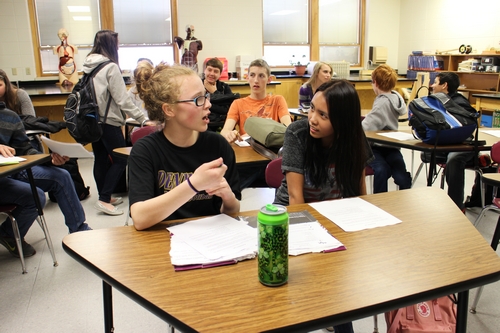 The class after lunch was happened to be outside. So we followed her out and took some pictures.
She still really shy about it. We leaved her school around 2:10 pm. And our visits has officially finished. Yayyy. 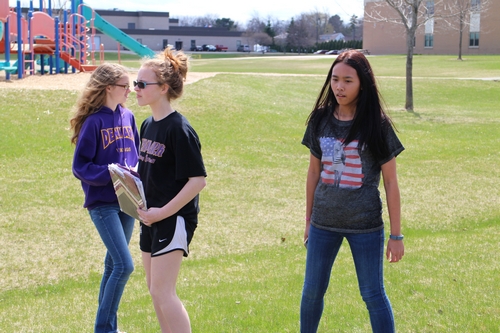 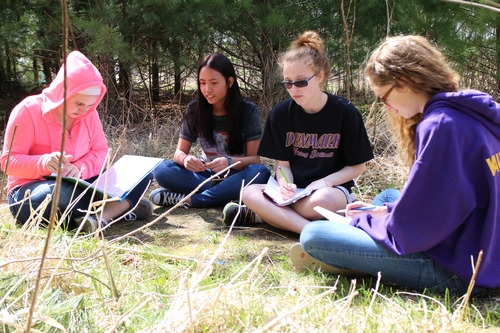 We went back to the car rental company because George had to sign some paper work to continues another 2 days car rental. It took more time than we thought. Good luck that we’re not so far from the boys’ school so we managed to pick them up only 5 minutes late. I was expecting to get some complain but I didn’t get any! Yayyyy

We had to go to the back so since the boys said they’re really really full, we took them to the library wile we went to the bank. They updated their blogs and spending some internet time. An hour later, we picked them up and took them to eat at Hardee’s. I was going to remind Toto about eating too fast but I forgot again. By the time I turn to him and was going to say that he’s already finished his burger. Too fast!

We went to the Miller’s house after that. Their house is near the Archery store and we had some business talk to talk to them. So the boys played with their kids and In. They played kick ball and soccer.

At 6 pm. we all went to the Archery store. We met Plakaow, Junior, Pokpong, Lily, Fah, In, Peem.
The owner explained some rules about safety and taught how to shoot a bow. He let them try one by one for one time and after that he let them just do it by themselves. Junior and In was quite bad at first. Hahahaha
Porsche can do very well. They all seem to have a lot of fun. 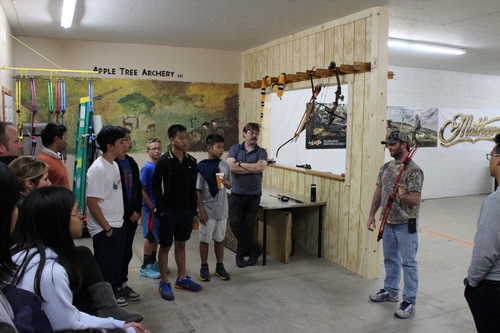 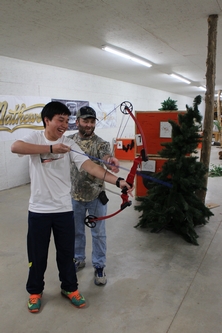 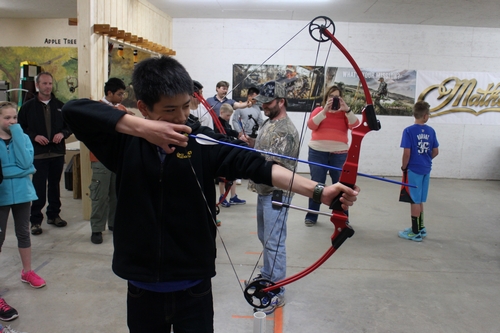 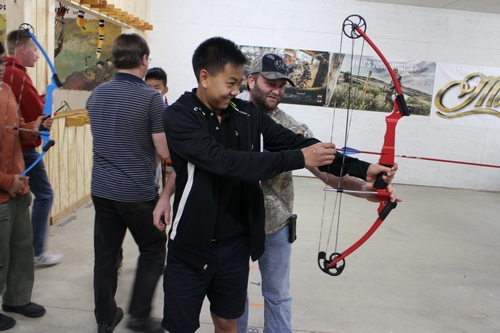 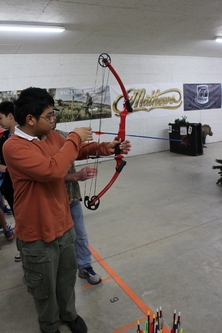 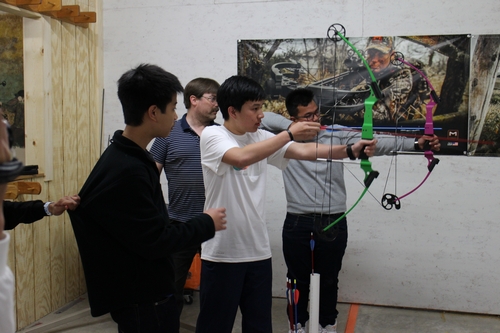 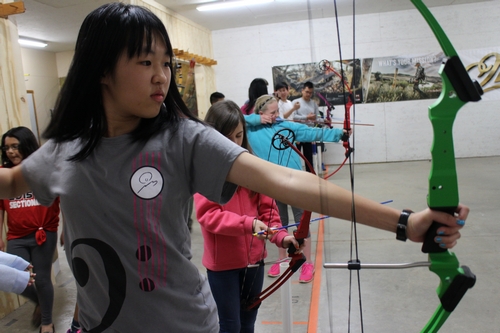 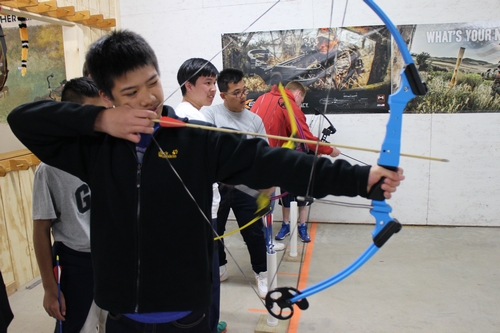 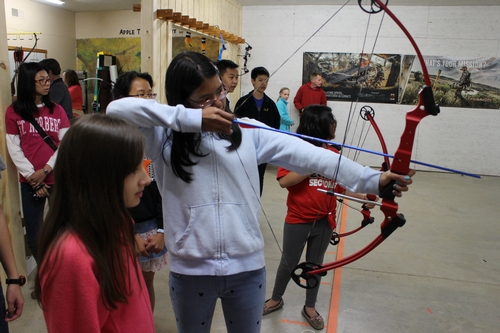 The owners asked not to shoot other thing further than the target he set up for.
Somehow the kids still tried to ask for shooting other things. He said “No” again.
But again, at the end of the hour, I heard them talking to each other that they’re going to shoot something they’re not supposed to. So I had to say “no” again and told them that I will take all those left arrows away from them.

George noticed that Toto didn’t play much during the hour. So when we got into the car.
He asked Toto how many he shoot and he said “2”.

George taught Toto that if he wanted to play with it. He has to step up for himself. He has tell his friends that he wants to play next turn. Otherwise everybody is going to play their turn.

After the archery, we went back to the Miller’s house again to continue our talk. The boys played with their kids again.
They seem to get together very well. They played table tennis at the basement. I heard that Porsche can play very well.
At the time we’re going back, they’re  best friends.

Tomorrow is going to be the last day school for the boys because on Friday their classmates have an exam.
The school suggest they don’t go to school. It seem like Porsche already let his friends signed the book for him and Toto already gave away all his gifts. They’re going to be sad. They said if tomorrow was in the beginning of the trip, they’d be so happy to get a day off but it’s not and they’re sad because they’re going to miss their friends.

Tomorrow, George and I had a meeting at 10 am. Sound like I can sleep late but we’re still work outside now so we’re probably sleep late tonight :S
There’s not much plan tomorrow. We’re going to join a bonfire at the Nelson’s house in the evening, probably eat there.