This “morning” we had a bit of an issue with the phones. I woke up around 4am to the buzzing sound of notifications. At first, just a few, but then more and more. Finally, around 6am, I went into the boys’ bedroom to find JT and Ohm playing on their phones.

I also heard some buzzing from the girls’ bedroom, but it quieted down while I talked to the boys. I’m going to give the kids another chance tonight to see if they can control their phone-habit, but if they cannot, I’ll be taking some phones away.

When the kids woke up, they made breakfast and then went out for a walk. After they came back, I took them to Pick-n-Save to buy some food. Nana informed me that she’d be picking out ingredients for today’s lunch and that we’d be having pork with fried cabbage. “Oh? You’re planning the menus now?” I said. “Yes,” she replied. Well, OK then, I guess I’m not needed on this trip! Haha!

When we got back to the house, I had a talk with the boys. I said that even though the girls were cooking lunch, that did not mean the kitchen was for girls only. I didn’t want to see the boys hanging around doing nothing while the girls cooked them lunch. This is the 21st century, and men can find something to do in the kitchen too.

So all the kids joined in to prepare lunch. They set the table together and helped peel the garlic and chop the cabbage. They also shared the responsibility for cleaning up the floor, counters, and dishes. 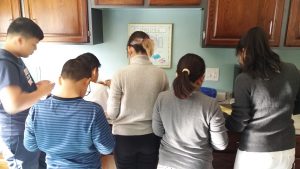 After lunch, we played a game of “Saboteur” a card game that required secret teams to dig a pathway to some treasure while the bad guys tried to sabotage their efforts. The game was a lot of fun and by the end, they were all shouting at each other to convince Nake, who held the deciding card, to let their team win.

After that, I went upstairs to take a nap and the kids continued playing some games at the dining room table. While I was upstairs, I heard a glass fall over and I knew someone had split some water, because the kids suddenly got very quiet. I heard them “quietly” cleaning up the mess and worrying about teacher coming downstairs to scold them.

I’m pretty sure they believed they’d gotten away with it and that I didn’t know they’d split the water. Even though when I came down, I noticed several of my cards in a pan next to the window, drying out. Hmmm… suspicious…

Later in the afternoon, I told them we would go out for a walk. It was pretty cold and they didn’t want to go, but I made them get dressed warmly and we went out. After about five minutes of walking and freezing and complaining, the kids asked me where we were going. So I told them that there was a Pokestop across the bridge and I wanted to go there to catch some Pokemon! Hahah!

I finally told them that I was just messing with them, and that we were going across the river to eat dinner.  Besides, I said, I didn’t have wifi anyway, so I couldn’t catch any Pokemon anyway. But then DD told me that she had internet and that she’d been sharing her hotspot with the other kids. WHAT!!?! I could have been hatching my eggs this whole time?! Aww, man!

We ate dinner at Casa Mexico in downtown Two Rivers. The food was pretty good and the kids were very full when we finished. We had tacos and nachos and some jalapeno poppers. It was very yummy.

When we got home, we tried watching movie on Netflix, but the kids could not agree. Some wanted to watch Coraline, but some felt it was too scary. Others wanted to watch an action movie, while others wanted to watch a comedy. After about 20 rejections, I finally picked the movie and we watched “Charlotte’s Web”. It was pretty good, but about halfway through the movie, Phop, JT, and Nake fell asleep, so I sent the kids upstairs to bed with a reminder that they were not to use their phones at night.

Tomorrow we plan on going to the library and doing some shopping in Manitowoc.