We woke up really early today at 5 am.
I went out to all the kid’s rooms to wake them up and came back to change my clothes. Around 5:40 am. we started to make the kids came out from their room and move all the bags downstairs. We told the kids to be quiet because people in the hotel still sleeping. It’s really hard for them not to talk. I think they did it quite well.

We moved all the bags downstairs quickly at a good timing. The shuttle bus came around 6:30 am. We moved bags and half of the kids to the first bus. I was in the first bus too. The driver on the first bus seem lazy about his job. I saw his attitude since we’re moving bags up to the bus.

He dropped us off at some shuttle bus drop off. It didn’t look like Korean air counter so I asked him if there was another stop somewhere else. He said this is the only stop he did. So I and half of the kids got off and move all our stuff. I called George and told him the door number that we’re in.

George was in the second shuttle bus with the other group. Eventually he knows that I went to the wrong place. Good luck that we always prepare for something goes wrong. We had plenty of time to fix this problem.

George told the second bus to come see me. George found me. He got off from the second bus and let me got on which mean now I changed to stay with another half of the kids and George stayed with the first group instead.

I took the group to the airport. The driver was really funny and friendly.
I didn’t have any dollar at that time so I exchanged Thai Baht to Dollar with Junior so I can tip him. We move all the bags inside and waited for George an the rest of the kids.Another 15-30 minutes, George arrived. He was impressed with the driver too. He asked me for more dollars to tip him.

Finally, we all were at the airport. I think it was only 7:30 am.
Some kids didn’t understand why we came so early.
Well, we came early because of this kind of situation that just happened. We can’t miss the flight! 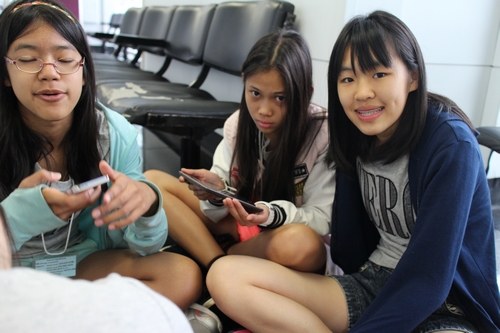 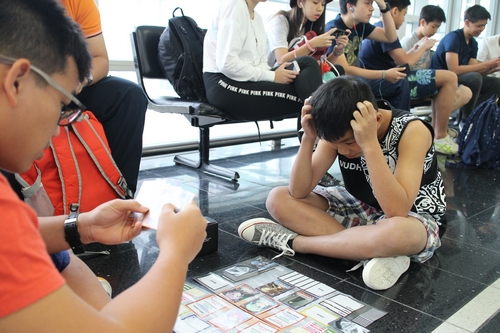 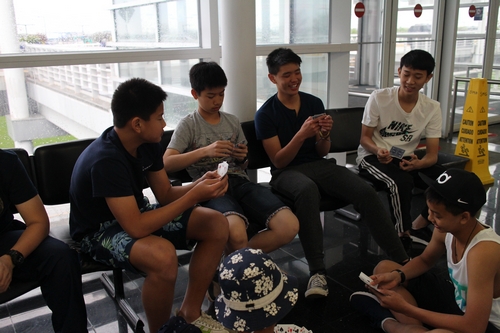 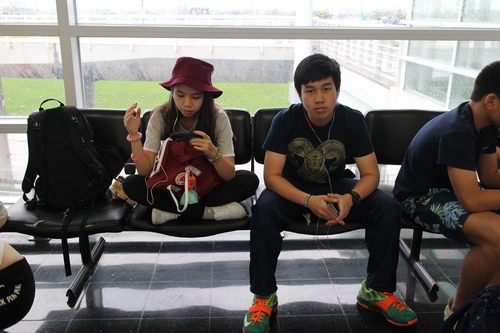 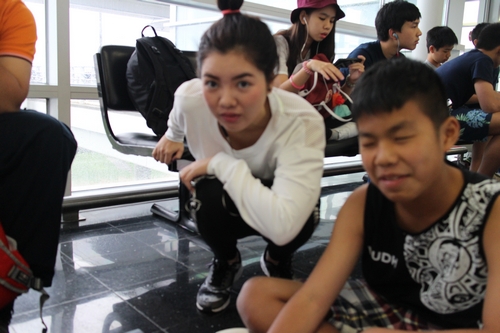 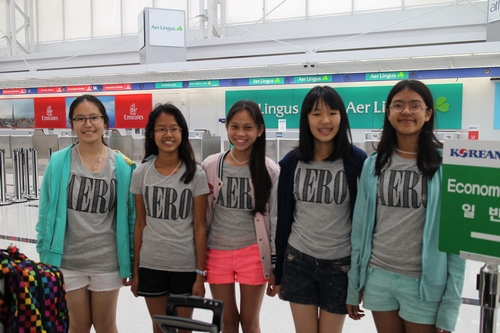 We waited around until 9 am. Korean air counter opened for check in.
We checked our bags and we went straight to our gate. Since we had sometime left, we let the kids shopping in the airport. I think this airport shopping area is really small. There are not many shops. George got some yogurt and veggie dip for all the kids.

While we’re walking around, Porsche ran to us and told us that he saw the monk that we went to see him in Manitowoc here. Last time we saw the monk, he mention that he will go out of town for a month but we didn’t know where. We’re really surprised to see him here. He was actually on the same flight, going to Bangkok with us!

Our first flight was 13 hours from Chicago to Korea. I sat with George and Toto.
I watched 4 movies during the flight. I slept a lot too. George didn’t really sleep.
Our flight was a little bit delay because of the air traffic. So we didn’t have much time to catch a connection flight. We were at the gate about the boarding time. 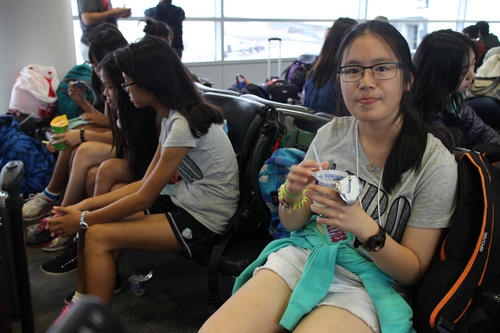 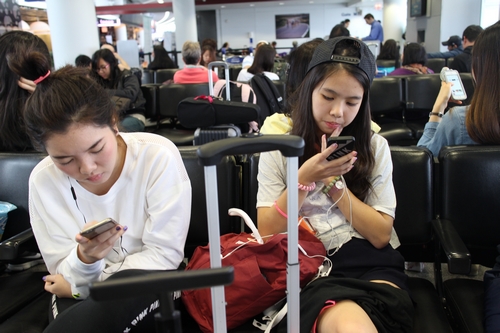 We spent another 5 hours from Korea to Bangkok. I watched only one movie this flight. And again, we got extra seat. We’re so lucky. Yayyyyy I can slept really well. Not so long, we arrived Bangkok.
Once we got off from the airplane, we can feel the heat right away. The kids complained about the heat even they’re in air conditioning room. Hahaha

We went through immigration and get our bags. We found that one duffel bag was missing. It had Muk and Mind stuff in there. George didn’t want to contact the airline when we were inside because we’re already almost an hour late from our landing time. He didn’t want the parent to get worry. So we went outside and return the kids to their parent first. I came back inside again and filled out the paper work for Muk and Mind. The airline said they will check again but so far there was no bags left here. If they lost it, they will refund the money as same as the stuff in there. 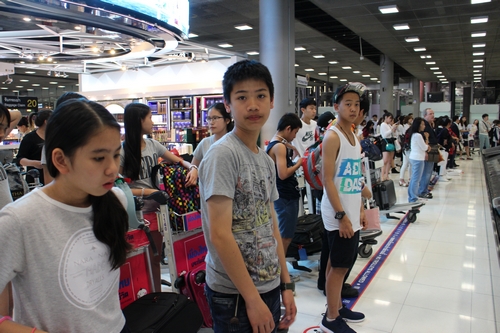 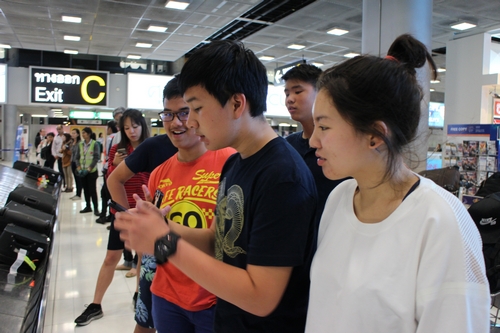 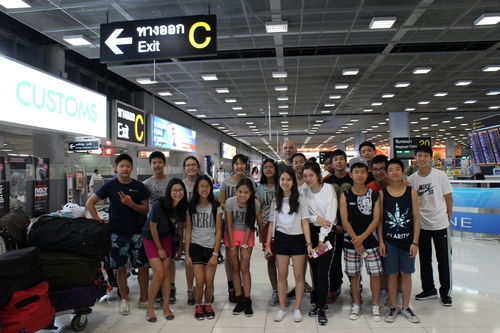 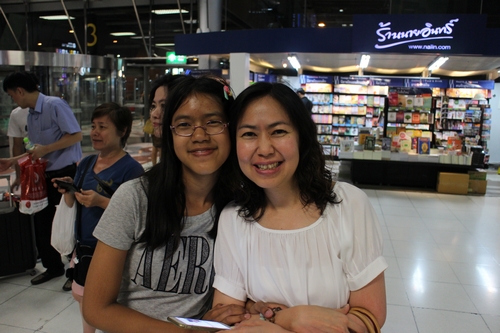 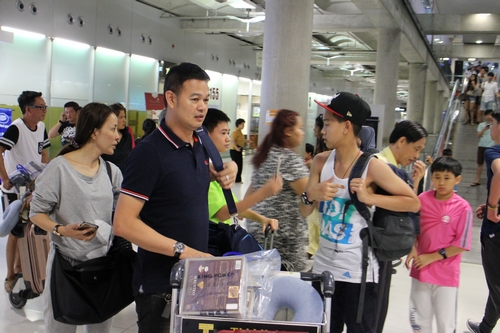 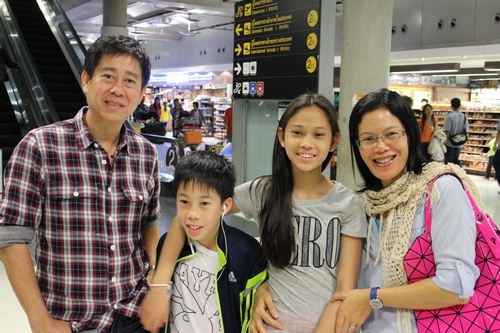 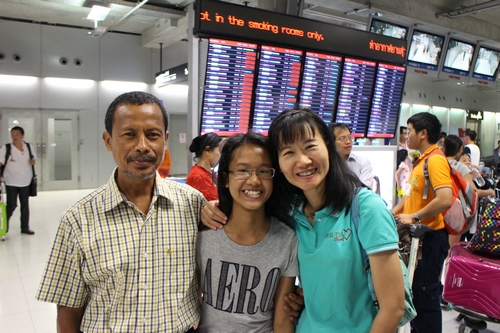 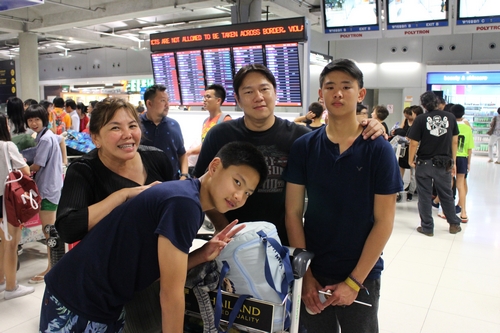 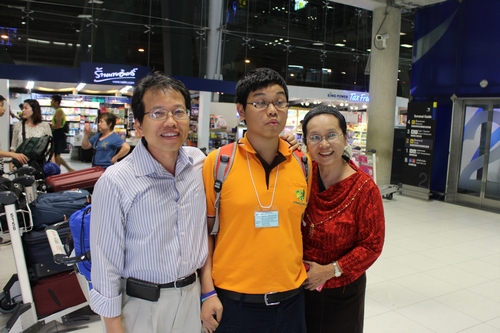 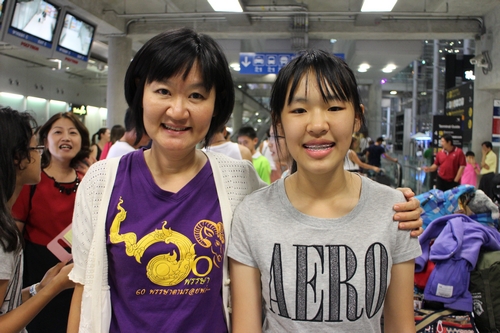 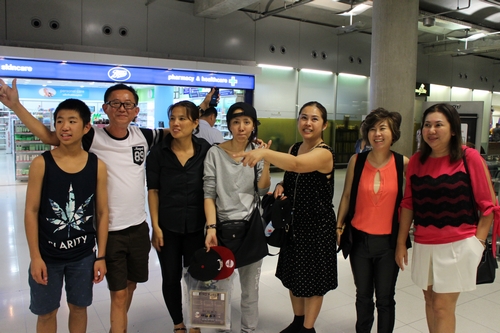 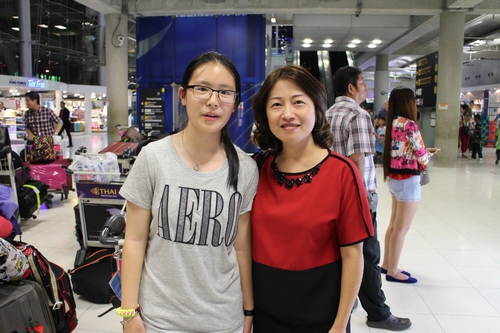 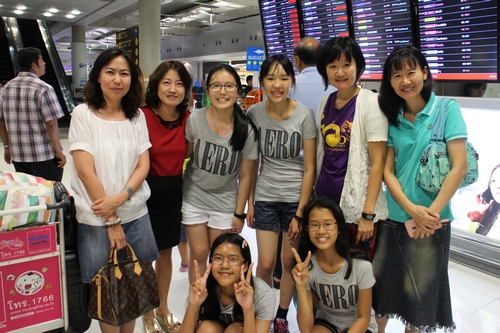 Around 11:00 pm., George and I went to get our rental car. George put all the bags into the car perfectly fit and drove us home. We knew a lot of work was waiting for us. When we’re not home for a long time, we usually get a lot of bugs. Also just a day or two before we came back, we heard that our cats were missing. Gam who took care of it, didn’t see them for two days and she thought they might get away.

We came home and found the our cats broke the acrylic screen and came inside the house. And Pumpkin pee all over the place!!! We didn’t get bugs anywhere else except the bathroom. So far we wouldn’t need much cleaning if the cats didn’t get inside. Poor Patty.

We decided to sleep in a hotel. I was really tired so we just went to the hotel near our house.
It’s Centara Grand Hotel. I wore my pajamas there. It looks old from the outside but it’s actually fancy inside.
I felt shy when I walked in there. The price were quite high. It’s about 250$ per night.
Our room was quite big and nice.  There was one living room, one bedroom and one big baht and shower room.
We took a shower, drank some soda and went to bed around 2 am.