Last night Junior and Plakaow bought some cards from the shop that we took them to.
They’re crazy about it. When we got back to the apartment, George and the boys were playing and looking at their cards.
They’re talking about card and many things. I can’t believe that at this age they still like to play games and cards.
We also ate some Tom Yum mama noodle. I ate the whole bag by myself but the boys shared the bag together. 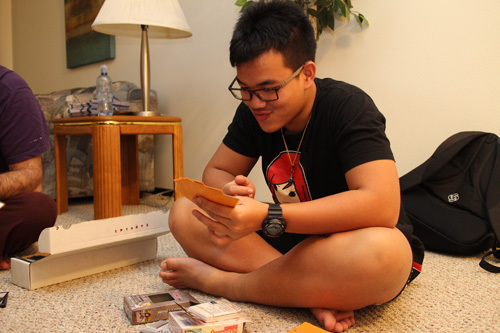 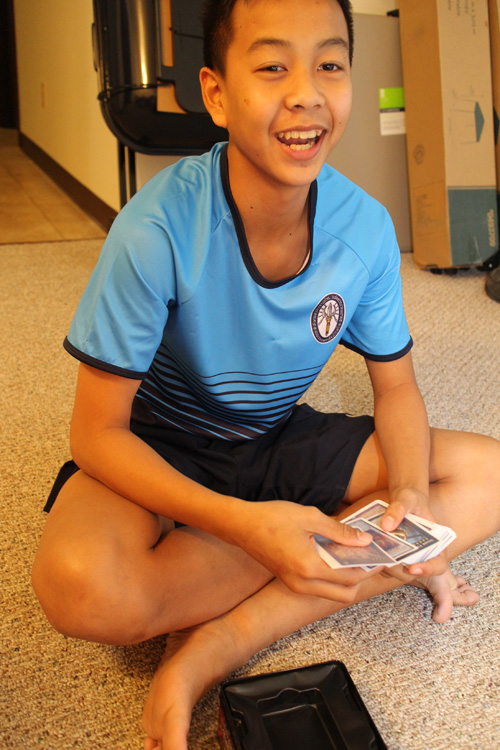 We have extra bedroom for them. Even though the bed was big enough, they still refuse to sleep on the same bed.
They said they will switch between sleeping on the floor or on the bed. 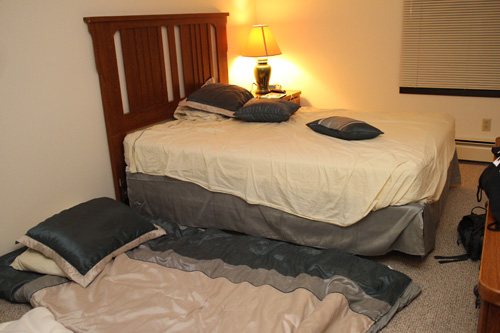 Around 11 pm. I went to bed but the boys and George were still talking.
It was Friday night and they don’t have school tomorrow so it’s OK.
I heard George told them a lot of stories. He told them about how he met me, his cool friends, his life.
He sounds like an old grandpa hahaha. Around 12 pm. he told the boys to go to bed.

Today I woke up around 8 am. George woke up a lot earlier and the boys woke up around 10 am.
We ate cereal for breakfast. I prepare some carrot and celery and oranges but the boys didn’t eat it at all.
George ate all of it. I also tried to make popcorn too. It wasn’t hard but my popcorn was too pain. I think it needs more salt.

We leaved the apartment around 11:30 am.and went to Qdoba for lunch. When we’re parking, we saw a bunch of girls walking and sitting on the yard next to the road. We saw Fah!! She came with her host sister, host mom and her friends that came to stay overnight for her birthday. They told us that today was Menchies 1st Anniversary so they sold the a cup of ice cream for 1 $ until 1 pm.
We’re going to eat it anyway but this is even better. 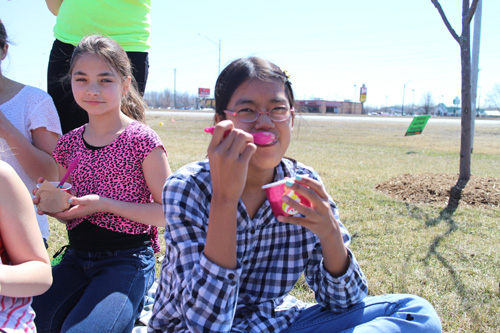 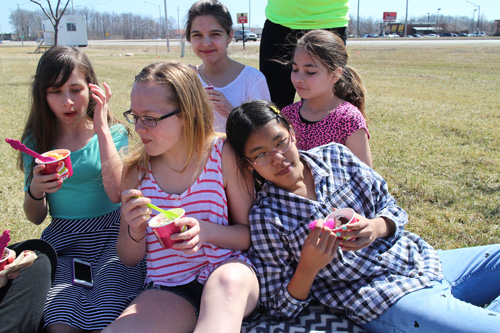 We hurried to get food at Qdoba. I ordered the same thing I like here.
The boys random picked something. They got Apple sauce and they didn’t like it Hahahha.
George was surprised by that. He said he never heard anybody hate Apple sauce. 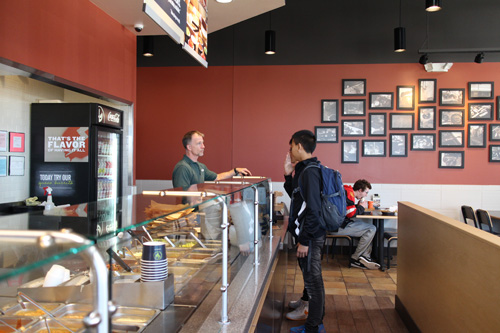 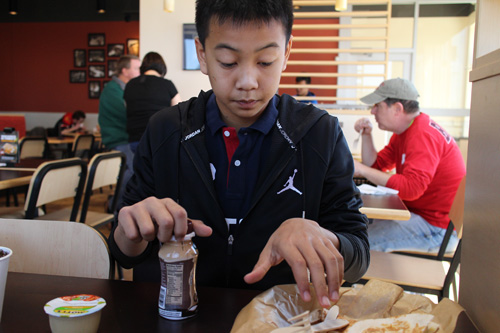 After that, we went to Menchies to get ice cream. Just a cup but it’s actually a lot. I almost couldn’t finished it.
Plakaow said he tried this similar yogurt before when he came to US last year. 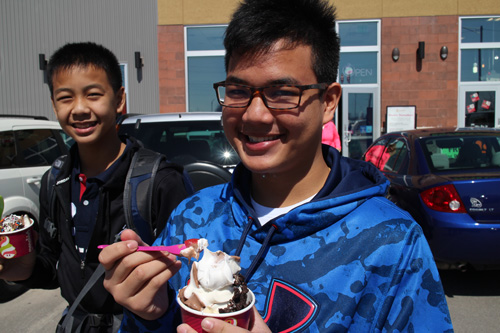 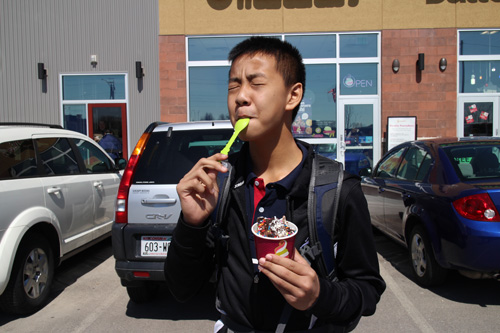 After we finished eating, we went to Walmart to buy food for the baseball game tomorrow.
The boys help us with the carts. 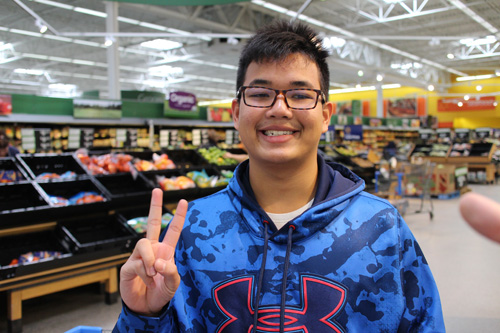 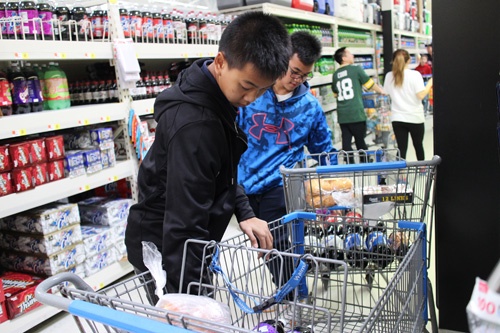 After George and I were done with shopping, we told the kids to go shopping for themselves while we went back home and move all the soda out of the car. We didn’t have enough space for the boys if we didn’t do that.

We went back to picked the boys and then we went to Manitowoc Coffee to use the internet.
The boys bought a lot of toy again.

We were at Manitowoc Coffee for a couple hours before we went to eat dinner.
George wanted steak but I was too hungry to wait for it so we went to Buffalo Wild Wing instead.
We tried a couple sauce and we decided to get Mango and BBQ sweet.
The mango one was hot. Junior was almost cry. HAhahaha 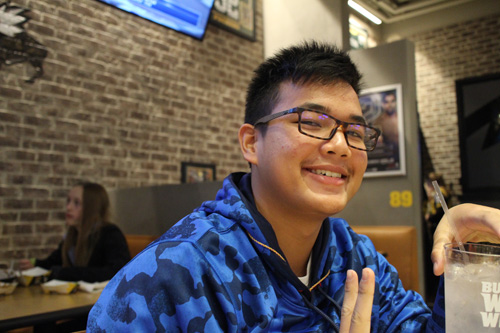 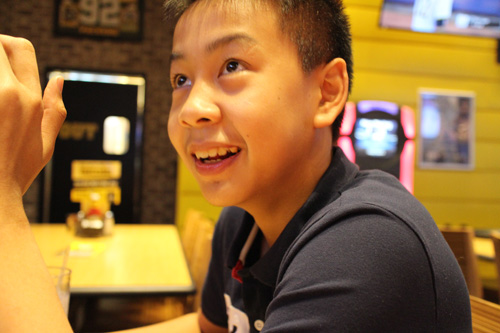 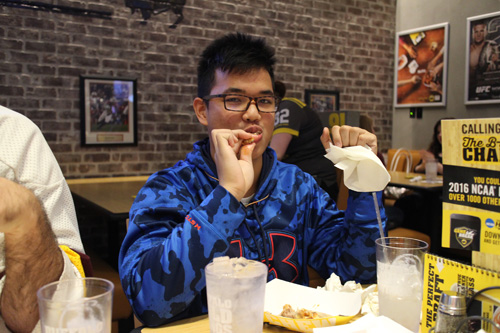 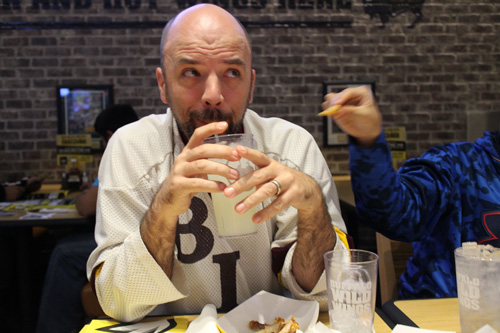 After dinner, George wanted to go watch movie. He spoiled the boys a lot hahaha.
But I didn’t want to go because we have to wake up early tomorrow.

If you notice, lately all the kids have been trying to write a longer blog. That’s really funny and cute.
I think they did that because one day I chat with all of them about who wrote the longer blog. (It was Toto, Pang, Pear)
And they might feel like “Oh somebody is reading! I didn’t just write for the air!!” So they start to write more so they can be a good students.
Now everybody try to write a really long blog and that give me more work to read! I shouldn’t talk to them like that hahaha.

Tomorrow is Baseball game day!
I have to wake up early because we will go to Milwaukee with the whole group of kids and host family by 8:30 am.
Since George and I have a lot of stuffs to bring and Plakaow and Junior are with us, we need more than one ride to get to the meeting point.
I and one of the boy will need to go first and stay with the stuffs. It’s going to be a long day.